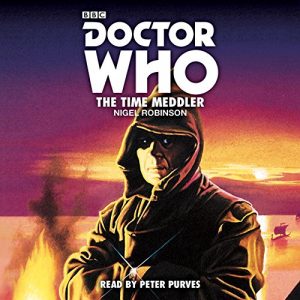 Before The Master, before The Rani, before Omega and the rest of the Time Lords and with the exception of course of Susan, there was The Meddling Monk. The Monk was the first of the renegade Gallifreyan’s to cross paths with the Doctor on television. At the time we didn’t know who The Time Lords were or anything about their home planet as all that we, the viewers, Vicki and Steven knew was that the troublesome Monk was one of the Doctor’s people. Set in Northumbria in 1066AD, The Time Meddler is a tale of Saxon villagers, Viking invaders and a lot of anachronisms. It’s an atmospheric story set in an England that is about to undergo massive upheaval and change as King Harold faces being besieged by the mighty Scandinavians in the North and the dominating Normans in the South and in the middle of these traumatic events sits Monk, who has designs and plans of his own for England.

Landing on a Northumbrian beach, the TARDIS brings the Doctor, Vicki and newcomer Steven into the medieval world. Splitting up relatively early on in the story, the Doctor goes off and makes friends with a Saxon woman called Edith and after enjoying her hospitality, mead and venison, comes face to face with the Monk. Steven and Vicki on the other hand, clash with some Saxon men folk before discovering things aren’t as they seem before heading to a sinister monastery, when they also encounter the Monk. Not so much evil as he is “naughty”, the Monk is a great character who honestly believes he is working for the greater good, but can’t see that his meddling will have dire consequences for humanity and the history of Earth.

Peter Purves take centre stage with his brilliant reading of this story and his portrayal of the other characters is definitely interesting. In the original television version the Saxons sounded like they were from the Home Counties but here Peter voices them in the appropriate Geordie accents.  One of the things that’s great about novelizations and audiobooks of the television adventures is that you get to experience scenes that were never shown during their original transmission, and in The Time Meddler, the story starts with Steven’s mad dash through the jungle as he avoids both Daleks and Mechonoids in his attempt to escape the mental machines. It also ends with a fascinating passage involving the Monk which, again, was never broadcast. The Time Meddler is an engaging, classic story noted for being a landmark chapter in the show, as it’s the first take to feature another of the Doctor’s people and the first pseudo historical. And as well as being a delight to listen to, it never gets old…  Nath Rixon