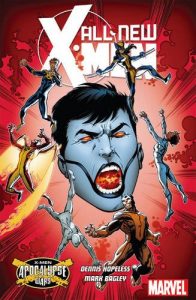 Does fate set each of us on an irreversible path the moment that we’re born? Are our roles in the Universal theatre predestined and predetermined, or can we change who, and what, we are and in doing so, change not only our own lives, but the world around us as well? These ideas, the fundamental questions that lie at the heart of the eternal debate concerning free-will and the existence of a higher power and the supposed guiding hand behind evolution, lie at the heart of Dennis Hopeless’ story in Apocalypse Wars. On his sixteenth birthday, Evan, also known as Kid Apocalypse, and Beast are catapulted three thousand years into the past, arriving in the Egypt that his “father” En Sabah Nur called home, before he became Apocalypse. Immediately forming an intense bond with his new “friend”, Evan begins to see him in a different light, and the idea that he can free not only himself, but the rest of the world as well from the burden of Apocalypse’s existence, changing time, existence and his “father”, becomes his all-consuming goal. However, time and tide wait for no-man, and Beast having seen reality in a different light thanks to Stephen Strange, is all too aware of the futility of Evan’s plan, and is forced to intercede in this fast moving, intelligent and emotional tale that turns the action-ometer way beyond safety levels before snapping the dial off and throwing it away as Apocalypse Wars thunders toward it’s finale.

As I’ve said countless times, and will doubtless say again, I’ve never been what you’d call the world’s greatest fan of the X-Men, but recently, following Brian Michael Bendis’s inclusion in their mythology, that’s started to gradually change. And with Hopeless and Bagley bringing their spectacular magic to mutant lore, the change in my attitude toward the X-Men is picking up speed, as the artwork, characterisation, dialogue and storytelling in All-New X-Men Apocalypse Wars are breath taking and propel the reader on a fantastic journey that explores and examines our understanding of the nature of humanity’s relationship with history. Sorcery, science, adventure and changing the past to create a better future lie at the heart of a story that begins by concluding, in brutal fashion, the Cyclops and Toad cliff-hanger that ended the previous volume, Ghost of Cyclops, before blazing a path through the ages. It’s time to mutate … Tim Cundle