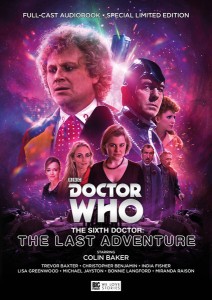 Doctor Who: The Sixth Doctor: The Last Adventure – Starring Colin Baker, India Fisher, Trevor Baxter, Christopher Benjamin, Michael Jayston, Bonnie Langford, Anthony Howell, Miranda Raison, Chris Finney, Ony Uhiara, Hamish Clark, Maggie Service, Ashley McGuire, Andree Bernard, Rory Keenan, Jessie Buckley, Kieran Hodgson, Lisa Greenwood, Lisa Bowerman, Lizzie Roper, Liz White, Robbie Stevens, Susan Earnshaw & Sylvester McCoy & Written by Simon Barnard, Matt Fitton, Alan Barnes, Paul Morris & Nicholas Briggs – 5xCD / Download (Big Finish)
So, at last, it’s finally happened. The Sixth Doctor has been given a full, comprehensive, no holds barred, thrilling, multi-part regeneration story that not only incorporates and explains the woefully inadequate original ending to his tenure in the Tardis, but throws him in at the deep end in a fight to the death with, arguably, his greatest nemesis: The Valeyard. I am, of course, referring here to a quite particularly to The Sixth, because as we know all too well, the Doctor’s (over-all) most terrible foe is a bone of much contention in fandom, with The Master, The Daleks and The Cybermen usually taking top billing. However, old Sixy and The Valeyard have, over the course of their encounters, developed a deeply intense, unforgiving relationship making it only right and fitting that their mutual animosity should culminate in their very own Reichenbach moment. Be warned though, even though you know it’s coming and that all good things must eventually come to an end, ‘The Last Adventure’ is a three handkerchief story, so make sure they’re readily available and within reach. For the inevitable grit that’ll get stuck in your eyes and the persistent allergic reaction that always seems to set in when a favourite Doctor regenerates. Most of all though, make sure you’re sitting comfortably, because this one, this one is something really, really special.

The events of the four separate, yet inextricably linked, stories that make up the whole, take place across the entirety of the Sixth Doctor’s life, allowing the writers to use four of his companions: Charley, Mel, Flip and Constance (introduced here). This in turn gives ‘The Last Adventure’ a grandiose feel, allowing it to become the huge affair that it not only is, but needed to be. It’s a magnificent tale that sees The Doctor foiling the attempts of another of his oldest adversaries to destroy time and space via a good old fashioned train mystery that’s been deliciously twisted and turned upside down in Michael Moorcock style battling. The Doctor finds himself saving strange lycanthropes on a world where the traditional “rules” are reversed, teaming up with his old friends Jago and Litefoot to discover why so many young actors are disappearing; before finally sacrificing everything in order to ensure the safety and sanctity of the Timelords and the Universe, protecting both from the most malicious threat to their futures that they have ever, unwittingly and unknowingly, faced. And at the heart of, and behind, each of these stories of adrenaline pounding, edge of your seat daring-do and strange goings on, is the scheming visage of The Valeyard, pulling The Doctor’s strings and manipulating each incident as his ultimate plan slowly takes shape. It’s like I said earlier folks, ‘The Last Adventure’ really is something special.

‘The Last Adventure’ is intriguing, interesting, involving and thoroughly engaging and utilises the Doctor and his companions to the utmost in flawlessly executed, and brilliantly written series of escapades. And, as if you haven’t already guessed by now, a nearly perfect Sixth Doctor release. I say nearly, because part of me, as I’m sure part of you will as well, yearned to hear the much missed, and lamented, Maggie Stables one last time, but circumstance and fate prevented it from being so, and with that in mind, ‘The Last Adventure’ really is as good as it gets and is a more than fitting end for a much loved Doctor. Goodnight Sweet Prince… Tim Mass Movement