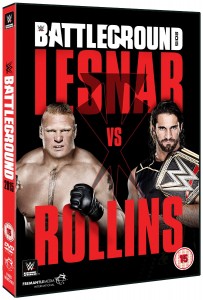 WWE Battleground 2015 (WWE DVD)
Brock Lesnar never fails to give a WWE pay-per-view that big fight feel, and the poster for Battleground 2015 adds to that perception with simple pictures of the champion, Seth Rollins, and the challenger, Brock Lesnar, on a deep black background with stark red writing reading: Rollins VS Lesnar. There is no doubt WWE put its entire promotional machine behind this pay-per-view, and as a result the final card feels tingling with excitement and energy. The message for both fans and talent alike is clear: this event is a big hairy deal.
What is excellent about Battleground 2015, is that it could have so easily been the coronation of Lesnar we all expected. After all, Seth Rollins hadn’t actually pinned the former champ in their match at Wrestlemania, and there was a prevailing sense that when Lesnar returned from his post-Wrestlemania break he would be placed right back in the title picture, having never technically lost his belt. Even the excellent build up to this match seemed to suggest an inevitable journey for Seth Rollins to Suplex City, with the destruction of Rollin’s back-up from The Authority over the preceding weeks leading us into Battleground assuming a final nail in the Rollins coffin would come via an F-5 in the main event.

And the match begins with that same inevitability — we reach Suplex City early, with very little traffic. The match feels like the sort of squash performance Lesnar had against John Cena at Summerslam 2014, or against Kofi Kingston a few weeks before in Japan. Rollins looks like a ragdoll as he is tossed from rope to rope and never really gets going.
But with one deathly gong from the Undertaker’s tolling bell, everything changes, and Battleground 2015, earns its place in WWE history as the place where Taker/Lesnar II begins and expectations are exceeded and exploded all at once.

If that isn’t enough reason to warrant a purchase, Battleground is also host to the pay-per-view debut of the Divas revolution in a stunning triple threat pitting the excellent Charlotte Flair against Sasha Banks and Brie Bella, reminding wrestling fans that if the company actually invests time and support into its female wrestlers they can be just as big an asset to the company as their male counterparts. It is also the third and final instalment of John Cena and Kevin Owens’ unmissable feud — as with all their previous encounters, this one too goes beyond the battles that preceded it and shows us a John Cena truly stepping up his game against one of the best and brightest new members of the WWE roster.

With an entertaining tag team title match between the Prime Time Players and The New Day, and surprisingly exciting matches between Randy Orton and Sheamus and Bray Wyatt and Roman Reigns (featuring the return of Luke Harper), the only waste of airtime on this outstanding event is King Barrett’s latest pointless encounter with R-Truth. But that’s what the “skip forward” function on your remote control is designed for.

All in all, Battleground 2015 is both an exceptional card in itself, and also does exactly what it says it will — setting the groundwork for future battles which will commence at SummerSlam and beyond. Chock full of debuts and returns, as well as great wrestling, this is not one you’d want to miss. Dan McKee