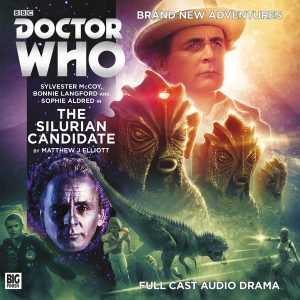 Okay, I’m going to start this review with a confession – I’m a big fan of Sylvester McCoy’s Doctor.  I’d go so far to say that he was my favorite pre-Eccleston Doctor, when the show got all modern and had proper special effects and stuff.  I know McCoy’s not a popular choice for many Doctor Who fans but, for me, he brought a sinister undertone to the Doctor and I thought that the concept of him going around tidying up the loose ends from his previous incarnation’s exploits had a lot of potential.  I’ve seen practically every Doctor Who adventure ever televised and I found the old black and white Hartnell/Troughton adventures too slow paced; Jon Pertwee had some great adventures but some awful ones too (*cough * Peladon); Tom Baker was awesome but jelly babies can only take you so far; Peter Davidson with his pleasant, open face had Adric as a millstone around his neck; and Colin Baker was just a shouty mess.  I lost interest at some point during the Davidson period but McCoy brought me back.  Yes, McCoy had some awful scripts and less than impressive special effects but for every Paradise Towers there was a Silver Nemesis or Curse of Fenric.

So I was quite chuffed when I was asked to review this latest Big Finish audio adventure, The Silurian Candidate.

I’ll continue to be honest – I haven’t been following these audio adventures at all.  Life today just has too many distractions; there’s the small pile of Playstation games that I’ve barely looked at, the ever growing pile of comics and books to read, enough DVD’s to see me through retirement (in just 17 years, 6 months and 12 days, not that I’m counting), the occasional review to write for Mass Movement, my full time job  and 2 new kittens to deal with.  But having listened to The Silurian Candidate, I’m going to be checking out some of the other Big Finish adventures.

If, like myself, you’ve never dabbled in the audio adventures of the good Doctor what you get is a story broken up into 4 chapters of around 20 – 25 minutes each. Complete with cliffhanger ending and title music just the show of old.  Excellent stuff.  This adventure details another attempt by the Silurians (if the title didn’t give it away) to wipe out mankind by tricking them into a nuclear conflict so they can do the job themselves.  It’s a plan the Silurians have tried and failed at before, but it’s a solid theory so they’ve decided to give it another go, bless them. The Western Block and Eastern Block stand at the brink and the Silurians have decided to give them a little push.

Standing between mankind and nuclear annihilation is the Doctor and his companions. Now I’d be the first to admit that one of the issues with the McCoy television run was his companions.  He had Mel (Bonnie Langford) who screamed a lot and generally had to be rescued from the monster of the week.  Then he had Ace (Sophie Aldred) a teenager with a love of high explosives.  I found Mel quite irritating and Ace mostly bearable in the televised adventures so I was expecting much the same for the audio drama.

As it turns out, Mel is a bit less irritating but still manages to be the one that gets into the most peril. And what perils there are.  As well as the Silurians themselves, this adventure brings in dinosaurs! cavemen! and an army of security robots called Carla!  They do miss a trick by not calling the robots Sheila though.  The leader of the Western block is Australian and at one point tells his assistant to ‘Send in the Carlas’.  It could have been ‘Send in the Sheilas’. Ah well.

All the performances are good, Langford and Aldred are easily recognisable in their roles if you’re at all familiar with the McCoy TV era and McCoy himself is all rolling R’s and mystery.  If anything, he tries too hard to be mysterious but that’s probably due to this being an audio drama so he’s over-compensating for you being unable to see his ‘air of mystery’ face.  One of only 5 he possesses.

All in all, I was quite impressed with this.  I thought I’d miss the visuals but not seeing Mel’s ridiculous outfit of the week was actually a bonus.  The script moves along nicely and even explains why there’s only a handful of characters involved, despite there being a nuclear war in the offing.  There’s a degree of humour and inside references that the long-time fans will get and I found myself smirking if not exactly laughing out loud, barring the line ‘Better safe than mown down by a firing squad’ which tickled me somewhat.

If you haven’t given these audio adventures a go, I’d strongly suggest you do.  Judging on this adventure alone, they’re a lot of fun and well worth checking out. Paul Ferriday