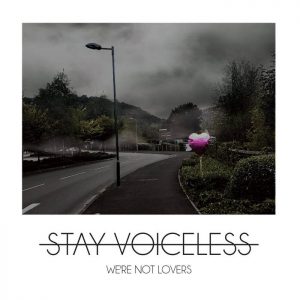 What year is it? On first spin of Stay Voiceless’ new single We’re Not Lovers I’d say we’re somewhere in the 1990s when Newport in South Wales was declared ‘The New Seattle.’ And who’s that twiddling the studio knobs? Looks like a certain Richard Jackson to me; he of Novocaine fame. As we get a backdrop of angular, jaunty guitars over urgent drums that thud with dark intent, everything seems to be falling into a place that’s far from pretty.

We’re Not Lovers takes off where last single Those Kids Have No Idea Whatsoever of What Went On at Stalingrad left off. That is, another song full of spite, anger and vitriol at the modern world. Previously, Chris Morgan spat “they cut our steel and eduction” over a sample of a Michael Sheen NHS rally speech. Now, the frustration is aimed at the narcissistic selfie generation as he vents “I’m sick of seeing life through the lens of a mobile fucking phone.” Stay Voiceless definitely wear their broken hearts on the rolled-up sleeves of their slogan filled t-shirts.

Social commentary runs through Stay Voiceless’ veins and this Welsh three-piece clearly have more than enough rage to expel over two sides of a 12″ in the future. They’re currently on the road in the UK so be sure to check them out. Just don’t expect them to be gazing at their shoes on stage with absolutely nothing to say. Ginge Knievil.