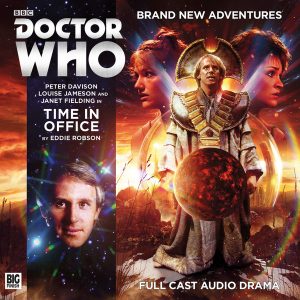 So anyone who read my review of the Silurian Candidate will know 2 things about me. 1) I haven’t been following the Doctor Who audio dramas and 2) I’m not a massive fan of Peter Davidson’s Doctor.  Even if he does have a pleasant, open face.  Although, to be fair, it was mainly due to what I think are the most irritating selection of companions any Doctor has ever had.  There was Turlough the galaxy’s oldest schoolboy; Teegan the constantly whinging Australian; Nissa who was a princess or something; Peri, can’t remember much about her to be honest; and don’t get me started on Adric.

I think the writer of Time in Office knows it as well.  The only regular companion to make a showing is Teegan (Janet Fielding), who was the least irritating of the bunch.  To bulk it out a bit, the Doctor also gets the Tom Baker era companion, Leela (Louise Jameson) to help him out on this adventure.  Or rather, adventures, because this story encompasses several exploits in one story.  Which is nice.

So for those of you who aren’t aware of these audio dramas that have been released by Big Finish, what do you get?  The presentation is basically the same as the old school Doctor Who television show – 4 episodes, with title sequence music at the top and tail of each episode.  And a music file of all the background tunes.  Each episode is 20 – 25 minutes long and although these particular episodes don’t end on cliffhangers, the story’s none the worse for it.

Ah, the story.  This one is a follow up to one of the original television adventures of Davidson’s Doctor (The Five Doctors – I think)  but you don’t really need any knowledge of that story to enjoy this one.  Basically, the Doctor at some point agreed to be the President of Gallifrey, his home planet.  Tired of being governed by a stand-in, the Time Lords hijack the TARDIS and bring the Doctor back to fulfill his presidential duties.  With, as they say, hilarious consequences.

Back on Gallifrey, the Doctor meets up with ex-companion Leela, a savage warrioress who gave up her adventuring life to settle down on Gallifrey, of all places.  Along with Teegan, they embark on the Doctor’s first presidential duty to attend a ceremony to honour the dead of a race of self styled Gods in order to cement the peace between the Gods and the Gallifreyans.  Turns out, the Doctor and Leela killed the Ambassador of the Gods’ brother and he’d quite like some revenge.  The Doctor and Leela try to resolve this by hiding in a shed, but to no avail.  The situation is sorted out by Teegan, surprisingly.  She actually manages to spend the majority of this adventure not whinging, which was a welcome change.

From there, the Doctor’s presidential reign becomes even more bizarre.  There’s inept student activists to contend with.  A Doctor ‘tribute act’ who inadvertently almost destroys Gallifrey by nearly wiping out it’s timeline.  Finally, the Doctor and his companions face the perils of rogue, sentient architecture before the Doctor finally manages to escape his presidency for good.  Of course, all this is wrapped up in political shenanigans aplenty.  What larks!

This is only my second Dr Who audio drama from Big Finish, but I’ve found them both to be well acted and very entertaining.  The story on this one jumps about a bit but it all comes together in the end.  There’s even a ‘back to Frontios’ running gag and a pleasing vein of humour throughout.  Give it a go, even if you’re not a fan of the Peter Davidson incarnation of the Doctor, it’s surprisingly humorous for a story that’s grounded in politics. Paul Ferriday