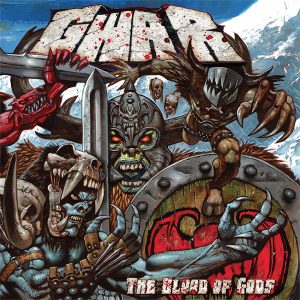 It’s impossible to discuss The Blood of Gods without talking about Dave Brockie. His alter ego Oderus Urungus was GWAR and GWAR was Oderus. And whether he was being Oderus or whether he was being himself, Dave was one of those people who always lit up a room when he walked into it, made everyone feel like they were his best friend and boy oh boy, was he funny. While I can’t claim to have known Dave well, having interviewed him a number of times we knew each to talk to and shoot the shit with. And Dave knew how to make me laugh for hours on end. Whenever I think about him, I think about the way he’d grin and then start talking about the most outrageous stuff that always, without fail, reduced me to a giggling wreck.  Yeah, I miss Dave, but I’m glad that his passing didn’t mean the end of GWAR.

The Blood of Gods was never going to be an easy record for the Scumdogs, and without Oderus leading them, they had a heck of a lot to prove with it; namely that GWAR could rise to the challenge and still be the beloved gore-soaked thrash machine who have slain, and continue to dispatch presidents, talk show hosts and Techo-Destructo on a nightly basis without their Galactic Warlord former leader at the helm.  But rise to the challenge they have, and with Dave’s long-time brother in arms Michael Bishop (now known as Blothar) assuming the role of front-monster, GWAR have gone back to their roots and constructed a crossover wrecking machine that’s packed full of hardcore energy and fury, thrash insanity and a sprinkling of rock’n’roll (I swear they must have been communing with the dead when they came up with I’ll Be Your Monster, because it’s the best Motorhead song that Lemmy didn’t write). It damn near decapitates you from the word go and doesn’t let up until the closing chords of If You Want Blood (an apt and fitting cover that gives the original a run for its money and then some) have faded into the background hum of the humdrum, banal and ever present noise of everyday life.

GWAR needed to smash it out of the ballpark with The Blood of Gods, but instead they knocked it into orbit. And withThe Blood of Gods, they’ve transformed the unholy trinity of Hell-O, Scumdogs of the Universe and America Must Be Destroyed into a quartet and are about to unleash their best record in more than two decades on us poor, pitiful and undeserving human filth.  Wherever he is right now, Oderus Urungus is listening to The Blood of Gods grinning like a maniac, pushing his cuttlefish to the limits of orgasmic destruction and bursting with pride. The Scumdogs did good. They did really, really good…  Tim Cundle

Music
2 comments to “GWAR – The Blood of Gods (Metal Blade)”