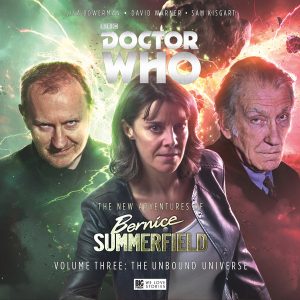 This latest release of The New Adventures of Bernice Summerfield hits the ground running when a mysterious incarnation of the Doctor from an alternate universe whisks the bewildered archaeologist away to his parallel domain. Here, in this new plane of reality, Benny finds herself in a dying universe that has all but been destroyed by a huge inter-galactic war. In the first story in the box set, The Library in the Body, featuring amongst other things, singing Nuns, Cyborgs with delusions of grandeur and this new incarnation of the Doctor, Bernice find herself in the last library and has to deal with both a menace from within as a mysterious presence lurks at the heart of the establishment and also a terror from without as the warmongering Kareem lay siege to the library intent on destroying the building and everyone inside it. As well as kicking things off with a flourish, it serves as a fantastic introduction to both the new universe and the new Doctor as David Warner effortlessly eases himself into the role.

The next part of the saga finds Benny and The Doctor on the rather “boring” Planet X. A world so dull that apparently neither side in the aforementioned war could be bothered to invade it. It’s a solid, strong story set in a dystopian society that splits the Doctor and Benny up as the latter finds herself on the run with local girl Milly while her erstwhile partner sets out to confront Planet X’s corrupt rulers. It’s slightly reminiscent of The Happiness Patrol and Orwell’s 1984 as emotion, imagination, and individuality are monitored by the government and anyone succumbing to them and their “irrationality” is dealt with, harshly and swiftly, by the authorities.

The Very Dark Thing, the third instalment in Benny’s latest adventures is incredibly involving and more than a little intriguing. Set on the world of Tramatz, a planet being bombarded by a hostile space fleet whose inhabitants are completely oblivious to the onslaught as they live in a veritable paradise of singing rivers, Unicorns, Emerald forests and of course The Very Dark Thing, seemingly oblivious to the destruction being wrought around them. It’s an unusual, thought provoking and thoroughly pleasing story, in which David Warner and Lisa Bowerman are on top form and really come into their own as the saviours of… well, everything.

All good things must come to an end and the final part of this series, The Emporium at the End deals with the imminent collapse of the universe. As the inhabitants of the doomed reality gather in a mysterious shopping plaza run by the enigmatic Manager (who promises that he can lead the people to salvation, in much the same way as all “cult” leaders do), the truth about the war and the part the Doctor played in it starts to emerge despite the Manager’s best efforts to have him thrown out of the store before all of time and space folds in on itself.

The Unbound Universe is an immensely enjoyable way to while away a day, and while Planet X and The Very Dark Thing are the stand out tales in this collection, The Emporium at the End and The Library in the Body more than hold their own in Bernice’s latest set of darkly humorous escapades. The journey throughout the new universe, buoyed by the casts’ powerful performances, is extremely well written and gives the listener an insight into what it might be like to live with an ever present clock ticking down to oblivion. Particular mention though must go to David Warner, who had he ever played the part of The Doctor on television would surely have been remembered as one of the very best incarnations of the errant Timelord. He manages to perfectly capture the spirit and essence of The Doctor, encapsulating everything that he is in his brilliant interpretation of the part. In fact, the only problem with The Unbound Universe is that there isn’t enough of it… Nath Rixon.