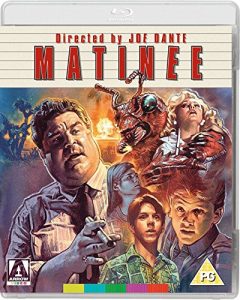 If you love B-movies, and you’re interested in the whole rich history of the cinema-going experience, and have a penchant for those ‘end of civilisation as we know it’ sci-fi movies from the ‘50s, you will adore Matinee, a gentle, fun and nostalgic mash-up of genres, which even finds time for some social, political and historical commentary.

Set in 1962, during the escalating Cuban missile crisis, when America was in the grip of Cold War paranoia and building fall-out shelters in its basements preparing for imminent nuclear war, ‘Matinee’ follows the fortunes of Lawrence Woolsley (played to perfection by John Goodman), a larger-than-life film producer in the vein of William Castle (he sells his films with such garish gimmicks as ‘Atomo-vision!’) or Alfred Hitchcock (he likes to star in his own trailers and introduces his own films) as he tries to sell his new film, Mant! (“Half man… half ant… half terror!”) with a screening in Key West, Florida. The film also focuses on the teenagers of Key West that plan to attend the screening, and their complicated home lives and proto-sexual relationships, in particular Gene and Dennis, two brothers who have moved to the naval base on the edge of town and whose dad is away on a ship blockading Cuba, and it combines affectionate humour and pastiche with a few thrills, some effective drama, and many knowing nods to the period.

Directed by Joe Dante, who was of course responsible for such classics as Gremlins, The Howling, The Burbs and Inner Space, Matinee is admittedly a strange film with a very niche audience, which might explain why it stiffed upon release, but if you’re a fan of movies like Them! and The Beast From 20,000 Fathoms and yearn for the unadulterated escapism you experienced when you first went to the cinema and lost yourself in the delirious chaos of Godzilla and Mysterious Island, you’ll find it a touching and enjoyable 90 minutes, and have a lot of fun with it.

And as always Arrow have excelled themselves with this reissue package, and you get the full film-within-a-film, Mant! (and trailers!), the usual making-of featurettes, and a candid discussion with Joe Dante, where he reveals how the film almost didn’t get made, and how he provided many of the period props from his own garage etc. Matinee is one of Dante’s more obscure titles but arguably one of his best. Ian Glasper