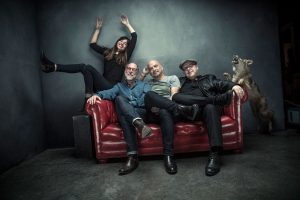 The music video for “Tenement Song” makes is bow today as the first music video for the Pixies’ upcoming album Head Carrier, due out September 30 (Pixiesmusic/Play It Again Sam)

Taking its influence from the song’s lyrics and Vaughan Oliver’s album artwork, the video was conceived and created by the UK/European-based Krank! Collective, and follows a journey through a squalid tenement block on the brink of demolition.  The Krank! team – Neirin Best, Lianne Pierce and Xavier Burrow – created the video using a variety of handmade and digital animation techniques, including old school light box, painted animation, rotoscoping and digital compositing.

Pixies head out on the road November 15 to begin its 2016-17 global tour to support Head Carrier.  Dates for Leg One are below.