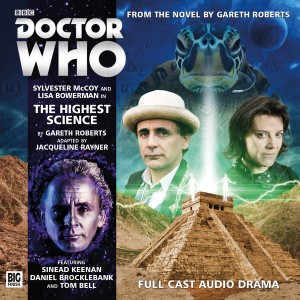 Doctor Who: The Highest Science – Starring Sylvester McCoy, Lisa Bowerman, Daniel Brocklebank, Sinead Keenan, Sarah Ovens, Rehanna McDonald, James Baxter, Tom Bell & Written by Gareth Roberts & Adapted by Jacqueline Rayner – 2xCD / Download (Big Finish Productions)
There was a time, following the BBC’s original cancellation of Doctor Who in the late eighties that I stepped away from fandom and retreated into a Whoniverse populated solely by VHS videos and the Target novelisation’s of the Doctor’s previous adventures. I only emerged from my self-imposed exile when the Eighth Doctor made his televisual debut. As such, there was a lot that I missed, including the Virgin New Adventures series of novels which expanded the mythology and canon of the Doctor and everything and everyone that surrounded him, and I’ve been desperately trying to play catch up ever since. So it’s fortunate (and I would’ve said coincidental if I believed in coincidence, which I don’t. So I won’t) that one of the only novels in that series that I haven’t managed to read, ‘The Highest Science’, is the latest to be adapted by Big Finish; fortunate in that it’s actually rather good.

‘The Highest Science’ see’s the Doctor intrigued by and determined to discover the source of a time disturbance, and Bennie landing on a world believed by at least one Galactically renowned psychopath to be Sakkrat, home to a long dead civilisation whose technology was reputed to be the legendary, ‘Highest Science’. And if the aforementioned psychopath, Sheldukher (the most evil man in the Galaxy) and his insane quest to be the one to discover (and use for his own nefarious purposes) this long fabled science wasn’t enough, The Doctor and Bennie also end up in the middle of a conflict between a race of militaristic, cybernetic tortoises and their latest enemies, the 812’s. Caught between a lunatic super-villain and a legion of gun toting, tank driving chelonians, and with Universe changing technology at stake, the odds against The Doctor and Bennie emerging victorious from their latest escapade begin to look like they’re stuck between preposterous and impossible. Then, just when things seem like they couldn’t possibly get any worse, our heroes stumble across the truth about ‘The Highest Science’ and find out the hard way that sometimes, happy endings only exist in fairy stories.

Gareth Roberts’ story submerges the listener in a good old fashioned, golden age Science Fiction romp that owes as much to Michael Moorcock and the pulp style adventure magazines as it does the humorous and irreverent style of Douglas Adams. It’s funny and exciting in equal measure, the characterisation and inventiveness of not only The Doctor and Bennie, but also the wildly strange adversaries, foes and allies that they encounter are remarkably rounded and ferociously creative, leaping from the speakers fully formed and ready for action. Which brings us to the cast, who are all, without exception, in fine form, and although Bennie and The Doctor take centre stage (as they should), Daniel Brocklebanks’s moustache twirling turn as Sheldukher is a joy to listen to and almost steals the show from under them. Almost. If I’d known, or had any inkling that ‘The Highest Science’ was even half as good as this, I’d have made it my mission to read the damn book years ago and as it stands, and after spending an afternoon on the plains of Sakkrat, I feel like I’ve missing out on some sort of wonderfully well-kept Whovian secret. But now I know, oh yes, now I know. I know the secret of ‘The Highest Science’ and it’s astounding… Tim Mass Movement