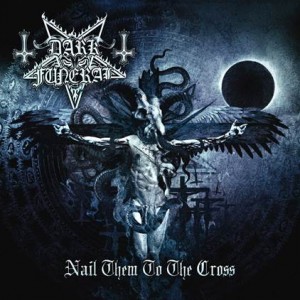 On February 23rd Swedish masters of furious, intense and merciless black metal, DARK FUNERAL, will return with the release of their new single entitled “Nail Them To The Cross”. Besides the title track, that has been released as a video some weeks ago in order to present their new vocalist Heljarmadr, the single includes another brand new track called “Temple Of Ahriman”.

Both songs were recorded at Dugout Studios in Uppsala/Sweden and were mixed and mastered by Daniel Bergstrand. The cover artwork was created by Marcelo Vasco.

“Nail Them To The Cross” will be available as a hand-numbered 7inch limited to 1000 copies worldwide, of which 500 copies are on black vinyl and 500 on blue vinyl, and also as digital download.

The 7inch will only be available at www.cmdistro.com and at the band’s live shows, starting with one of their first appearances featuring the new members Heljarmadr and Natt at Blastfest (Bergen, NO) on February 20th. The CM Distro pre-order starts on January 26th.

Check out the title track “Nail Them To The Cross” HERE.

DARK FUNERAL also announce that there will be new merchandise available, featuring the single cover artwork. T-Shirts, Girlies, Backpatches and Strappy Dresses can be pre-ordered from January 9th and will be shipped from Jan 19th on.