Warning: preg_match() expects parameter 2 to be string, object given in /var/www/vip4/sites/vip6102689/httpd/htdocs/wp-includes/formatting.php on line 4866
 Doctor Who: An Ordinary Life - Mass Movement
x
Spread the love 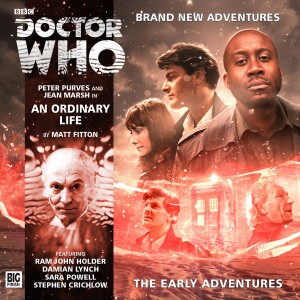 Doctor Who: An Ordinary Life – Starring Peter Purves, Jean Marsh, Ram John Holder, Damian Lynch, Sara Powell & Stephen Critchlow & Written by Matt Fitton – 2xCD / Download (Big Finish Productions)
Time’s a funny old thing. Individually, it’s our most finite resource, and collectively, it’s the one thing that changes mass perspective and ideas, and the younger we are the faster we want it to pass, while the older we get the get, the slower we want its progress to be. It’s a strange commodity, and while it’s always been one of the core attributes of ‘Doctor Who’ (which, after all is a series that’s, fundamentally, about time travel), ‘An Ordinary Life’ utilises the passage of time in a different manner, as it lands the Tardis crew in London during the late nineteen fifties and uses The Doctor, Sara and Steven’s attitude toward equality to highlight, vilify and ridicule the anachronistic and appalling attitude toward immigration that was prevalent in society little more than half a century ago. And it’s also an eerily, atmospheric adventure that you’ll find yourself returning to time and time again.

Set during the our heroes’ flight from the masters of Skaro in ‘The Dalek’s Masterplan’, ‘A Ordinary Life’ throws Steven and Sara, thanks to a mysterious set of circumstances that temporarily remove The Doctor and Tardis from the equation, into life in fifties Britain, where they have no choice but to find employment and somewhere to live. An ordinary life. However, things are never ordinary in the Whoniverse, as Steven and Sarah soon find out when it becomes apparent that one of the family they share their housing with (Michael) is more than a little different; differences that his wife and uncle are also quick to highlight whenever he’s discussed. Michael is no longer like he used to be, Michael has changed since he came to England. And Michael isn’t the only one who’s different, and when the people around them begin to change and all start to become ‘different’, just like Michael, it isn’t long before Steven, Sarah and The Doctor (yes, he re-appears) realise that if they don’t do something, it won’t be long before the whole world starts to become ‘different’, and the ordinary life they’ve become a part of, won’t be so ordinary anymore.

Using and exploring similar themes to Jack Finney’s ‘The Body Snatchers’, such as the loss of identity and the changing face of society when incorporating different cultures and the baseless fear, misunderstanding and violence that can be directly linked to the later ‘An Ordinary Life’ is tight, well-paced, fantastically performed, allegorical Science Fiction that captures the mood and setting of both the First Doctor’s adventures and the period in which it unfolds, perfectly. It’s a historical tale that casts it’s net within living memory and uses the premise of invasion to highlight the strange, confusing and at times, terrifying, ideas of previous generations, yet at the same time is a completely engrossing First Doctor adventure that’s imbued with pulp horror and feeds off, and from, the slow burning, simmering tension that fuels its plot. Terrific stuff… Tim Mass Movement