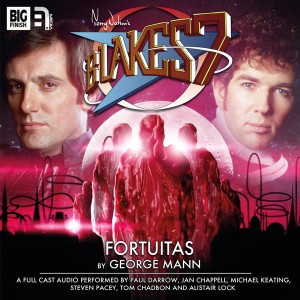 Blake’s 7: Fortuitas – Starring Michael Keating, Paul Darrow, Stephen Pacey, Jan Chappell, Tom Chadbon, Alistair Lock, Jo Howarth & Hywel Morgan & Written by George Mann – CD / Download (Big Finish Productions)
Remember the old adage ‘The more things change, the more they stay the same’? It would appear that humanity will, if the future presented by Blake’s 7 is anything to go by, learn absolutely nothing from its historical mistakes and will let itself be crushed under the jackboot of fascistic oppression until the Sun burns out or the species fades away. Whichever happens first. While we’re on the subject of political ideology and how it relates to the destiny of mankind, it’s explored further in ‘Fortuitas’, as Avon and the crew of the Liberator become ensnared in the stratagem of a fringe political party while continuing to search for the missing Dayna.

Chasing a lead that reached them from the tourist planet Solace; Avon, Grant, Vila, Cally and Tarrant end up becoming detectives when their quest for their comrade leads them directly into a series of mysterious disappearances. Disappearances that none of the locals want to talk about. Fearing that Dayna may be among the missing, and along with local information broker Ranking, their investigation leads them directly to ‘Fortuitas’, a separatist fringe organisation who will stop at nothing to achieve their goals. But Fortuitas is just the beginning, and the deeper they dig, the more they become ensnared in a web of lies and deception, a web set up to catch a much larger, and much closer to home, fly. With their freedom, lives, and the ultimate fate of Solace at stake, the Liberators crew have no other choice. They have to fight.

It’s often been said that the best drama acts as a mirror to reality, and ‘Fortuitas’ does exactly that, it’s story reflecting the current state of European politics and the rise, and terrifying current popularity, of right wing organisations and their all too often bizarre and twisted agendas. With a razor sharp plot and a cast who play their roles to perfection, ‘Fortuitas’ delivers an action packed, and entertaining ride that, even though the twist becomes obvious to both Avon and listener alike, manages to sink it’s claws deep into your subconscious. In fact, it is, all things considered, rather good indeed… Tim Mass Movement