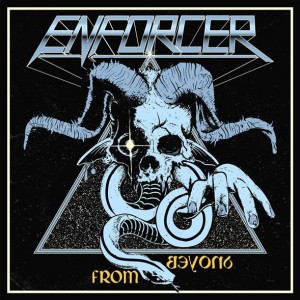 Swedish Heavy Metal act ENFORCER has finished the recordings of their upcoming new album, called From Beyond. This fourth ENFORCER record will contain ten new songs, produced, mixed and mastered by the band on their own.
The album will be out on March 2nd (UK) . Pre-sales start today.

Vocalist and guitar player Olof Wikstrand comments: “From Beyond is faster, heavier, louder, darker and more vicious all at the same time without losing a tiny bit of what ENFORCER stand for. A fist in the face of all current trends and a stake through the throat of modernity. Total metal!”

From Beyond will be released on a limited edition digipak, as well as on vinyl in different colours.

Pre-order From Beyond HERE!

Every sound wave you hear on From Beyond is 100% ENFORCER!