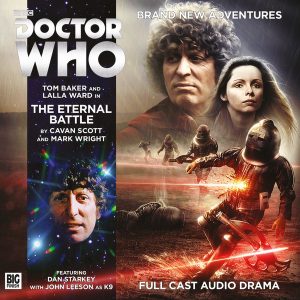 When the Fourth Doctor decides to take Romana and K9 on a quiet holiday to the Lake District (complete with a visit to the Museum of Pencils Throughout The Ages I’ll have you know – so it’s an educational holiday), he instead finds Sontarans exhausted of war, robbed of the potential for glory, yet still forced onward, fighting a never-ending battle. So if you’re a Doctor Who fan who’s not keen on the Sontarans current use as little more than comic relief, you’re going to want to pick up The Eternal Battle. This one’s serious Sons of Sontar all the way through, with our favourite potato-headed clones doing the one thing they’re always shouting about – waging endless war.

If you’re a Doctor Who fan who isn’t keen on war as a thematic concept, then Big Finish’s latest Fourth Doctor adventure is still for you because, at its heart, it poses an interesting question: can you have too much of a good thing? Even if you’re a cloned species whose whole raison d’etre is to fight and die in glorious war, is it possible to become battle-weary and worn down with constant slaughter? The Sontarans we meet here have been fighting an enemy now for so long that even their commanding officer, Field Major Lenk (played by the now-incomparable Dan Starkey) is tired of the fight.

Authors Scott and Wright’s underlying message, writ large throughout the story, is that eternal warfare robs conflict of any notions of glory, or valour beyond the premises of the war itself, and that any idea of warfare as an expressed ‘lust for glory’ is hollow and false to any creature that values its own life. This makes The Eternal Battle a thoroughly bizarre but utterly fascinating take on the Sontaran psyche – invented to be clones, bred by the million and sublimating individual grandeur and glory to the idea of ‘the greater good’ that is their jingoistic empire. Take that away from them, make them feel the need to survive as individuals, and you bring them closer to a more human experience of warfare. In fact, you give them something to learn, not for the glory of Sontar, but in the humbling, easily—defeated, isolated, individual long dark night of the Sontaran soul.

This all leads to an ending that actually makes us feel sorry for Lenk and his platoon, trapped as they are in their endless cycles of violence, bigotry and conquest. Whatever they learn, and whatever Lenk takes from the experience of The Endless Battle, we know it’ll be just a blip in Sontaran development, the lesson ultimately to be lost on the species as a whole. The trick, hopefully, is not to let the lessons of this story be lost on OUR species as a whole.

The Eternal Battle, like the Sontarans themselves, is compact and powerful, giving us a new way to understand their species, and our own. Pick it up and get in the trenches with the Sons of Sontar today! Bex Ferriday