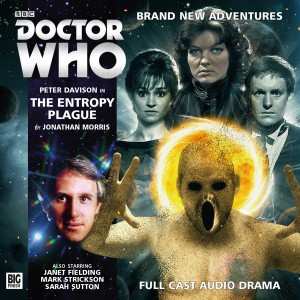 Doctor Who: The Entropy Plague – Starring Peter Davison, Janet Fielding, Mark Strickson, Sarah Sutton, Robert Duncan, Catherine Skinner, Alistair MacKenzie & John Voce & Written by Jonathan Morris – 2xCD / Download (Big Finish)
The events that leave the greatest impression on an audience are the ones that, much as in life, you never see coming; but when they arrive they hit with the force of an exploding bomb with a legacy felt long after the dust kicked up by their impact has settled. The Whoniverse isn’t immune to these moments, indeed it has a long history of “dropping” them (almost out of the blue) on its fan-base, with ‘The Dalek’s Masterplan’ ‘The Hand of Fear’, ‘Earthshock’ and ‘Doomsday’ being perfect examples that immediately spring to mind. Why mention it? Well, because ‘The Entropy Plague’ is one of those stories, it has one of those moments, and right up until that oh so familiar music begins, signalling the end of the story, you’re (well, okay, I was) desperately hoping that The Doctor will find a way to reverse what’s happened and return things to the way they were before the Tardis once again entered E-Space.
Beginning in the immediate aftermath of the closing moments of ‘Equilibrium’, The Doctor, Nyssa and Turlough pursuit of Tegan’s kidnappers through E-Space brings to Apollyon, a planet where electricity doesn’t work, as any form of electrically generated power is instantly drained away through the CVE, the one semi- reliable, although not quite stable, gateway back into N-Space. Except the gateway isn’t just draining energy from the planet, it’s draining everything from E-Space and hastening its entropic decay and destruction and as it’s the only definite way of escaping death, it’s also become a magnet for refugees seeking to escape the end, becoming both salvation and annihilation for an entire Universe. It’s here that The Doctor and his companions discover that being saved comes at a deadly price, one they must eventually pay if they ever hope to escape the rapidly decaying confines of E-Space.

Told in a series of flashbacks, each from the perspective of a different member of the Tardis crew, ‘The Entropy Plague’ sees The Doctor, Tegan, Nyssa and Turlough battling not only the physical manifestations of Entropy, but the rat-like, vicious and merciless cunning of Tegan’s captors, the pragmatic, cold and slightly deranged logic of the gatekeeper, and their own morality as they’re forced into a no win situation in order to get home. Superbly written and performed, ‘The Entropy Plague’ is as much about the relationship dynamic that exists between the crew, one that’s thrown into a state flux that only resolves itself as the story reaches its powerful and emotive finale. This is one of those moments that you don’t want, and can’t afford, to miss, because from here on out, things are going to be different. Very different. Get your hankies ready, this one packs one heck of a punch… Tim Mass Movement