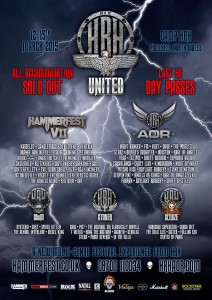 The road to Hammerfest is a long hard haul, but once there it is most definitely worth the trek. If you have let the journey put you off before, then you only have yourself to blame. Besides, the last hour of the journey is a beautifully scenic route through some amazing countryside – the calm before the storm…

Arriving a little late (well it had been going since Thursday), things were well and truly underway as we entered the now familiar site. The community spirit that had taken over Pwllheli could be deeply felt, even though it was just after mid-day on Friday. Combined this year, as a joint extravaganza alongside the successful AOR Festival the amount of people mingling on site was a healthy salute to the world of metal and rock.

Kingdragon took to the AOR stage as if it were a packed Mediterranean arena, benefiting from a great sound, and delivering an array of awesome melodic power rock the slowly swelling crowd seemed to take to them well. A swift march down to the newly located Hammerfest Stage was in order so as to not miss the beginning of Italian metallers Elvenking, who proceeded to deliver a stunning set of Pagan inspired folk shenanigans whipping the responsive crowd into a lively climax. Not over shadowed by past occurrences Elvenking set about giving everything they promised from their performance. Vega then proceeded to woo an array of melodic rockers by performing a contrasting set of tuneful numbers, collecting plenty of smiles from the ladies surrounding. The bands commercial accessibility was lapped up and very well consumed by the now heaving AOR Arena. Angel Witch probably had the largest crowd for the Hammerfest Stage. Slamming through classics, delivering a momentous set and pleasing a lot of people, it was great to see the NWOBHM stalwarts recreating what many had not witnessed for years – one of the weekends highlights without a doubt. Following on, Xentrix weren’t going to have an easy task, and playing to a slightly less packed audience probably wasn’t the ideal setting for the returning UK thrashers. Receiving a warm welcome and bringing a few old school tunes out of the bag it was still a great chance to catch up with a band I personally had not seen live for approximately twenty-five years!

It was a tad disappointing to have to leave mid-set, but in order to catch some of New Jersey rockers Starz sacrifices had to be made. Banging through some old school classics, it’s bands like this which remind you strongly where so much began, and why groups like this are still performing. A delightful set and some banging tunes. Hardcore Superstar smashed the sleaze stage with their triumphant party bellowings. A well received band who play it like they say it. There was little time to slow down during this roller coaster ride as guitar riffs and party hard choruses echoed triumphantly. Witnessing Hirax play took us back to thrash metal hay-days. Their set transported everyone present right to the very essence of this genre leaving me with the feeling that I had not seen a thrash gig with this intensity since the late 80’s. The crowd lapped up Katon De Pena’s antics, and created a vortex of speed possessed carnage ensuing maximum crowd carnage. Return soon please chaps.

With the time now being 01.15 I unfortunately had to miss a couple of bands!

Waking up on the Saturday morning, and heading down to the Mash and Barrel for a large ‘full English’ is the immediate order of the day. A sturdy lining is needed to allow continuation of what would become day two of alchofueled musical fun. Food is no problem here on site, as the array of feastings should suffice anyone.
With Steak getting caught up in motorway traffic, it was a shame their dulcet tones weren’t going to ease myself into the already swelling party antics. White Widdow smashed a memorable imprint with the crowd, getting a great reaction, enabling sing-a-longs, and performing a great sounding note perfect set, this was definitely one of the bands many will be talking about after festivities finish. I can’t imagine how big these guys would have been had they been around thirty years ago. Eclipse seemed to grab the attention of many, but it was when Crazy Lixx took to the stage that the party well and truly took shape. These guys could do no wrong and had a packed arena eating out of their paws the entire set – I really felt for the band who were due to play after. The Admiral Sir Cloudsley Shovell wrenched out some bastardised heavy metal of proportional power. These Londoners don’t pull any fancy tricks, it’s just heads down and go, solid and old school, no nonsense. Hard and to the point. Pure dirt rock ‘n’ roll. A fitting warm up for Orange Goblin (all be it on a different stage) who have now turned into one of Britain’s finely oiled behemoths of metal. Frontman Ben Ward lets Hammerfest know who’s in charge, and the quartet receive a pleasing response crashing through a denim clad set of head banger biker reverberations.
What can be said regarding Candlemass that has not already been said? Blasting through set of classics the response to these Swedes is phenomenal, and even with an abundance of line up changes to date, they still prove to be the godfathers of doom. Heavy, solid, and sturdy. Not one duff note, not one duff song – thank you Candlemass. Lastly tonight for myself was to be Night Ranger. The giants of AOR/melodic rock had walked into an arena of anticipation and excitement. Playing as if they had never been away, and delivering a set, which wipes the floor with many younger bands, it was a greatly received way to end a perfectly rounded festival.

The pleasing fact of great sound all round, no matter which band, that makes this festival un-miss able. Mark Freebase