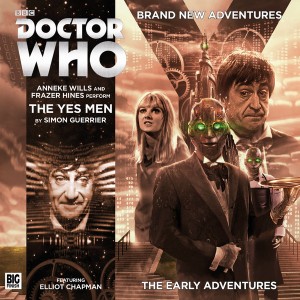 Doctor Who: The Early Adventures: The Yes Men – Starring Frazer Hines, Anneke Wills, Elliot Chapman, Lizzie McInnerny, Stephen Critchlow, Timothy Speyer & Jane Slavin & Written by Simon Guerrier – 2xCD / Download (Big Finish)
It would appear that this is a month for new faces appearing in old (bit much loved) roles. Not only has the Third Doctor returned to fly the Tardis in a whole new set of adventures, Ben Jackson (now played by Elliot Chapman) has also returned to the fray, joining the Second Doctor, Jamie and Polly on their travels through the vortex of the fourth dimension. While most of Ben’s televisual escapades have been lost to the mists of time, thanks to the dedication of Who’s early fans and their on air audio recordings of the original transmissions, they’re available as soundtrack only releases. Meaning that for generations of fandom, Ben has become somewhat of an enigma, especially given his importance to the mythology of the show. After all, along with Polly, he was there when the Doctor first regenerated, which makes him pretty special as far as canonicity is concerned. And now he’s back, making his debut in ‘The Yes Men’. Even though his role isn’t exactly huge, it is pivotal to the plot, and he does, thanks to an uncanny portrayal by the aforementioned Chapman, add to the dynamic of the Tardis crew, giving their relationship and the way they interact with each other additional weight and gravitas.

Along with Polly and Jamie, Ben, after a lesson in flying the Tardis given by the Doctor, ends up in New Houston, an Earth colony that the Doctor previously help fight off, and liberate from, an invading alien force. But this isn’t quite the colony that the Doctor remembers, it seems strangely lifeless, and his old friend and comrade in arms, and now colony leader, Meg has apparently died in mysterious circumstances. So mysterious that no two reports can agree on the circumstances of her death, and the more the Doctor looks into it, the more confusing and bizarre things become as he finds himself immersed in political prestidigitation, corruption and double dealing. As the Doctor delves into the secretive world of his former colleague, Jamie and Ben find themselves caught up in the middle of an unexpected revolution that not only adopts them as its guiding lights and figureheads, but also threatens everything that the citizens of New Houston hold dear. History looks like repeating itself, so it’s up to the Doctor and his companions to step into the breach, put themselves in harm’s way and save New Houston from itself.

From the opening scene inside the chaotic control room of the Tardis through to the final, touching scene, ‘The Yes Men’ doesn’t let up for a single moment and barely allows you time to catch your breath, as the plot drags you along at a staggering pace. Questioning ideas of artificial intelligence, the concept of individuality and notions of equality, while making fun of the outdated notion of a class based society and exploring the ways in which loyalties and people change over time and due to circumstance, Simon Guerrier’s tale allows the impressive cast to flex their dramatic muscles to the fullest. Reinforcing Dalberg-Acton’s opinion of absolute power, ‘The Yes Men’ is a wonderful, opening chapter in the long over-due continuing adventures of a Tardis crew that I never thought, or dared dream, would get to fly together again. Strap yourselves in folks; it’s going to be one heck of a ride… Tim Mass Movement