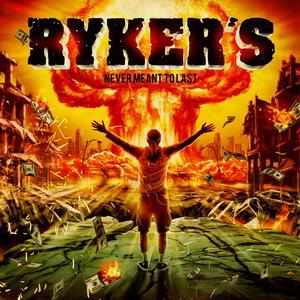 Ryker’s – Never Meant To Last (BDHW)
I honestly thought Ryker’s were done when singer Kid D announced his departure. I mean he has been a major part of the band’s sound since the very beginning, and his thunderous vocals made the comeback album ‘Hard To The Core’ the record we all longed for. I still wasn’t really convinced when the new front man was announced as being former Brightside shouter Dennis. Although Brightside has often been called Ryker’s little brother from the Kassel Area, Dennis obviously has a different sound. I do love surprises however, as ‘Never Meant To Last’ is as pure a Ryker’s record as they come. Dennis slightly lighter vocals add a different power to the songs, which makes them come across faster and more anthemic, without letting go of that Ryker’s groove which makes this band stand out in the first place. And, although new to Ryker’s, Dennis has paid his dues with several other bands. That experience, and the simple fact he grew older, makes his contribution to this beast of a record the best work he has ever delivered. More pure hardcore than before, but still just as impressive. Martijn Welzen