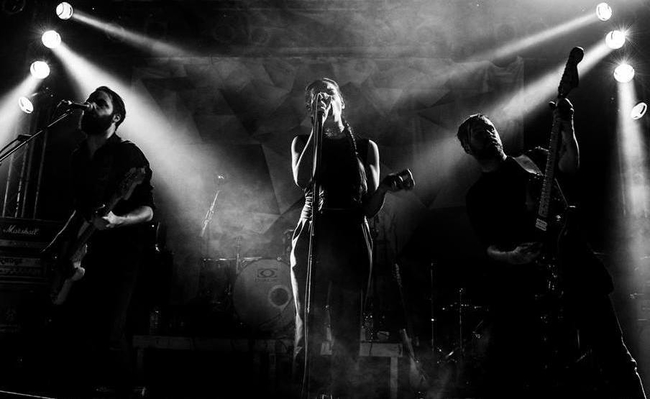 GOLD have premiered a third single from their forthcoming album No Image – listen to and watch a video clip for “The Controller” today, courtesy of TinyMixTapes. Vocalist Milena Eva commented: “‘The Controller’ is a sweet little post-black metal song about a confusing world, which comes with a confusing video. What is real? Is ‘in real life’ actually taking place in the outside world? And who’s in charge?! It is a psychedelic collage of beautiful offline and wondrous online footage: the Normandy sea, Moroccan Alpine choughs, ASMR, banana tutorials and crying babies. Have you taken your pills? Or are you getting out of control?”

GOLD was initially conceived in 2011 in the Netherlands by guitarist Thomas Sciarone (ex-The Devil’s Blood) and vocalist Milena Eva. Their mission statement was to play a distinct form of heavy rock as a monument to civilization’s decline. With a vocalist named after Franz Kafka’s lover, it may come as no surprise that GOLD‘s unique output deals with solitude, love and absence of prospect. Their debut album Interbellum showed the promise from this unique band through its many riffs, hooks, and most notably, Milena’s unique and distinct vocal delivery. Now three years after their debut, GOLD return with No Image an album that goes much beyond the promise laid down with Interbellum.

Embracing even more the roots of dark/death rock, noisy loud indie-rock, experimental music, and post punk respectively, No Image is a rawer, heavier, and much darker expression than the debut, and at the same time one more enchanting, addictive, and seductive. Recorded and mixed by Jeff Zeigler (Kurt Vile, The War On Drugs, Nothing) and mastered by Brad Boatright at Audiosiege (Yob, Bell Witch, Sunn 0)), Leviathan etc), No Image is the sound of a band truly finding their feet, a group of individuals who are not afraid to take responsibility for their own place on this earth, and above all, to question everything that is put in front of them.

No Image will be released via on November 6, 2015 via Profound Lore in North America (and Ván Records on October 24 in Europe).