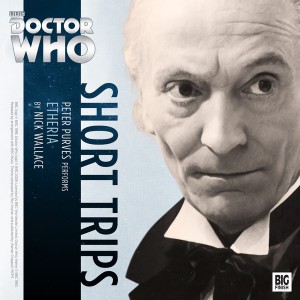 Doctor Who: Short Trips: Etheria – Written by Nick Wallace & Performed by Peter Purves – Download (Big Finish)
When the Doctor’s adventures were first beamed into homes around the world, Science Fiction was still very much a genre based around fantastic adventure, little green men, bug-eyed monsters and strange worlds in far-off galaxies. The passage of time however tempered the tales of distant mystery from beyond the stars, and the stories inspired, and fed, by their pulp origins faded into obscurity. More rational, focused minds emerged from the genre’s annals, leading it in a more scientific direction. However, unlike the literary endeavours with which it was so closely affiliated, Doctor Who retained its sense of fevered, wide-eyed imagination and in ‘Etheria’ returns to the glory days of the golden age of Science Fiction in a story that could easily have been the cover feature for any edition of ‘Planet Stories’.

Having been separated from Steven following their escape from a marauding band of space pirates, The Doctor and Vicki set out to find their companion on a curious alien planet. In order for them to be reunited though, they must cross through the mist-shrouded wasteland that has been the downfall of many a hardy soul. With the help of a native guide, Thaylor, they venture into the fog known as the Ether to discover the whereabouts of their friend. And like so many before them, they soon fall victim to the power of the Ether, as it changes them, the world around them and everything they thought they knew. Before long their quest becomes a struggle for survival on a world in which nothing and no-one is what they seem to be.

‘Etheria’ is a glorious throwback to the newsstand magazine days of science fiction. Nick Wallace’s take is like a head-on collision between the pulse-pounding perils popularised by Alex Raymond and his most famous hero Flash Gordon and the more thoughtful, gentle and intelligent prose of Ray Bradbury. It exists somewhere in the middle ground between both, while relying heavily on each to tell it’s story, which is expertly narrated by Peter Purves. Had it featured any other Doctor though, ‘Etheria’ probably wouldn’t have worked, as its part of that wonder filled period in which the death of golden age Science Fiction and the beginning of Doctor Who overlapped. A time in which anything and everything was possible and space bound adventure wasn’t constrained by anything as boring or mainstream as ‘scientific fact’, and a time for which every die-hard Sci-Fi still yearns. Welcome to the final frontier… Tim Mass Movement