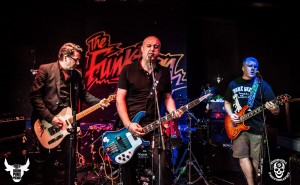 “Keysie said about doing a few songs for a laugh at Slugfest” were the immortal words that Shovel (Steve Lovell, guitarist and fuzzy-haired sex machine with Trigger McPoopshute) uttered some time in the Spring of 2010.  “I’ll play drums if you fancy a knock about” was the response from Pix (Lee Nichols, drummer and sleeping champion with the same bunch of reprobates) replied.  “Seeing as I just bought that bass from Pix, I’ll have a crack as well.  I’ll sing/shout as well if you want”, I chipped in. and that as they say is where it all began.  A few practises mad the whole plan a bit more feasible and, before you knew it, a debut, eponymous single saw the birth of Trigger McPoopshute.  A drunken whirlwind of a set in full fancy dress justified the whole insane idea and that was that……….wasn’t it.

After a few months, conversations frequently turned to “how good a crack was that Trigger set?”  The practise room was revisited, a Christmas gig was in the offing.  A tweak of personnel brought in Dean (Pratten, guitarist, love machine and “the new Cheetah Chrome” according to Glunk Records’ Dom Daley) and that gig became a reality.  The ball was rolling, lusts were being satiated by blasting out loud music in sweaty rooms.  The still honoured Trigger McPoopshute mantra of “ask them, the worst they can say is no” was exercised in blagging a couple of out-of-town.  Soon we had “played with JD & The FDCs and Section 13” on our CV.  Even early on, remembering anything from the latter parts of those gigs/nights was a struggle.  It seemed straight edge wasn’t an option.  More Slugfest, a fateful blag onto a Sick Livers gig and a spot on the Le Pub Christmas gig saw 2011 out nicely.

The only Olympics, Trigger would see in 2012 was those which took place on the toilet circuit of the UK.  We went abroad (well Stoke-On-Trent, Bristol and the Forest Of Dean) and even made an EP. We felt as big as Stryper…..ish.  Drinks flowed, gigs blurred.  You really do realise how fucking ace this DIY punk rock malarkey is when you look around you and see brilliant bands, that no supermarket music-buying plankton will ever give the time of day, blasting it out, your name on the gig poster next to theirs, sharing a beer with them……   Then there comes a tipping point, good or bad.  You’ve managed to play with some legendary bands you never dreamt you’d share a stage with, back when those formative words of the band were first uttered.  Your CV now has UK Subs, Citzen Fish, English Dogs and  Vice Squad on it and you’ve become mates with The Sick Livers, Dirtbox Disco, The Hip Priests and Wonk Unit.  Fuck yeah.  On the off chance you message a band from Gothenberg, Sweden to ask if they are planning any UK shows, and two months later your sharing a stage with The Chuck Norris Experiment in London and Nottingham (along with the Hip Priests).  Oh yeah, that tipping point?  This was it.  Playing with a band whose record you gave a rave review to a few month’s earlier makes you realise there’s a game to be upped.  And so it was fucking upped.  The Stupids, Down By Law, Harrington Saints – oh, if we must!!  Like kids in a sweetshop, or more likely pissheads in a brewery the lsdt 18 months has been a truly wonderful. 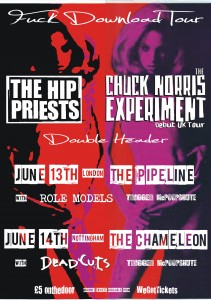 But who’d have thought that an airline’s incompetence could be such a powerful factor in punk rock.  A nearly aborted gig in Dublin with our now full-on spooning, neck-kissing lovers The Sick Livers landed us with enough money to actually record this wonderful noise we’d been making these past few years.  VJ Knievel agreed to take some time out from drinking 5 Euro cans of Coke to record, produce, mix and master the beast and in the space of six hours in June “Inhuman Drinking Machine” was born.  With a title inspired by Lucy Edwards’ ill-advised taste of one of the band member’s drinks, 11 tracks of DIY punk rock make-up said record, with more influences (good and bad) than you can shake a stick at, there’s a bit of everything in there.  With lyrics which are always tongue in cheek, there might be a few faint of heart who might take offense, but there’s only good intention and an ethos of “everyone’s welcome”.  No prejudice, just good honest good-time music.

Come on in, the beers are cold.