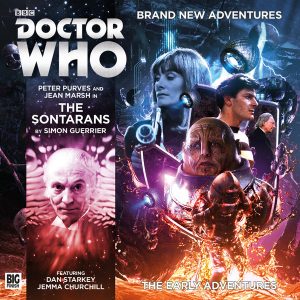 When the Third Doctor came face to face with Linx in The Time Warrior it was made quite clear that the Doctor was fully aware of whom The Sontarans were and was also strongly hinted at that he had previously encountered them. And earlier, The Second Doctor had come face to face with the Sontarans (off screen), something that is made crystal clear when he is being tortured by Group Marshall Stike in the The Two Doctors. Which begs the question, when did the Doctor actually first meet the militaristic brutish clone race from the planet Sontar? Now at last we have the answer as the First Doctor, Steven Taylor and Sara Kingdom, while fleeing from their persecutors in The Daleks Master Plan, stumble headlong into a conflict between Earth’s Space Security Service and the Sontarans .

The story takes place on an asteroid which is part of a belt that forms a figure of eight around two gas giants. When listening to the description of this, the mental image that forms in one’s mind of the planetary system is both staggering and beautiful. Sadly for the Doctor and his two friends, they don’t get a chance to enjoy this incredible spectacle as they are set upon by Sara’s colleagues in the SSS before the Sonatarans eventually make their appearance. From a death defying leap into a volcano, to a meeting with a young rebellious native girl called Tinder The Sontarans doesn’t ease up for a minute.

The main cast are superb, especially Peter Purves who not only does a masterful job of playing Steven but also gives voice to The Doctor and if this wasn’t enough, also provides the narration for The Sontarans. It really is rather nice to have a story with Sara Kingdom in as her tenure in the TARDIS was all too brief and it’s lovely to have Jean Marsh back playing her. What of the Sontarans or rather the actor playing them? The various sons of Sontar are voiced by none other than Dan Starkey, who on television plays the most famous Sontaran of them all, Strax. Needless to say Dan is marvellous and is to the Sontarans what Nick Briggs is to the Daleks. The supporting cast of Jemma Churchill, John Banks and Rosanna Miles are top notch too, playing very well alongside the leading duo of long-time Doctor Who veterans. The Sontarans as characters are sometimes, unfairly, overshadowed by the likes of the Daleks and the Cybermen but they do have something that a lot of Doctor Who villains lack. Even though they’re clones, Sontarans have distinct personalities which make for great story telling. Sure, as a race they are all about conquest and war, but individually they do differ. Linx was a pragmatist, Styre was a sadist, Staal was a strategist and Strax is well… Strax. And in The Sontarans Commander Slite has another interesting attribute you wouldn’t expect, he is willing to listen to reason. A wonderfully dramatic, action filled tale that finally reveals the Doctor’s first encounter with the Sontarans. Sontar Ha! Nath Rixon