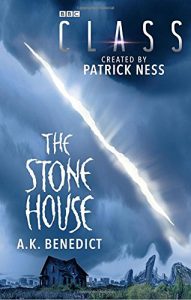 Read through the first few chapters of Class’s latest tie in novel The Stone House and you’ll soon realise that it walks a well-trodden path; there’s an abandoned old house that people say is haunted and over the course of many years, the figure of a girl with no face has reputedly been seen by a number of passers-by, standing at an upstairs window.

At this point you may be tuning out. After all, there are only so many haunted house stories that anyone can take. But this story soon diverts from that well-trodden path, and, thankfully, it soon becomes clear that this is no ‘haunted house by numbers’.

The Stone House centres upon the youngest of the Class crew. At just fourteen years old, Justine clearly feels very out of place (something that the television series also echoes, but also makes for an inroad for younger viewers). She’s absurdly intelligent, so is studying in the sixth form of Coal Hill Academy two years ahead of schedule. This means that her peers are all a couple of years older, so are more emotionally mature, and more sexually active. Justine feels left out, worries that people don’t take her seriously and that the rest of the gang just think of her as a kid. And it’s this sense of ‘not belonging’ that leads her to become linked with that faceless girl, who she feels duty bound to help, and who may or may not be trying to guide her at the same time.

I absolutely loved watching the first series of Class. Admittedly it felt like I was watching a CBBC drama with added gore and occasional swearing, yet somehow it still managed to feel more adult and more considered than Torchwood ever did. Much of this, I think, is to do with the fact that time is given for reflection and character development, which is in direct contrast to Torchwood’s more bombastic approach and often felt like a load of sixth formers had been let loose in a television studio and after having a cheeky spliff, had decided that they needed to make the show packed to the rafters with shocking, sexy, gory and sweary stuff because GROWN UPS LIKE THAT! Class is a very different beast. It is intelligent, and it shows a great deal of respect towards its audience. The Stone House is no different. Bite-sized chapters make this a breeze to read through and the pace is pitched perfectly; fast enough to keep you engrossed but measured enough to be totally coherent throughout. And A.K. Benedict’s writing ensures that the audience wants to keep turning those pages and (vitally) needs to know what happens next. It’s often funny, it doesn’t try to be too knowing or cool and, and if I were the fantastic Miss Quill setting some homework, I’d demand that you read this, but unlike our favourite physics teacher, not on pain of death. Bex Ferriday