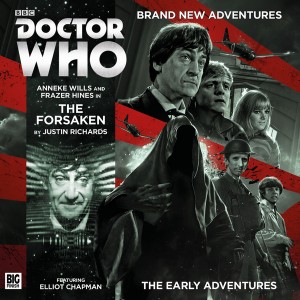 Doctor Who: the Early Adventures: The Forsaken – Starring Frazer Hines, Anneke Wills, Elliot Chapman, Michael Jibson, Ben Nealon, Oliver Jackson & Gabrielle Glaister & Written by Justin Richards – 2xCD / Download (Big Finish)
No matter how many times I hear Frazer Hines’ uncanny, and frighteningly accurate portrayal of the Second Doctor, it still sends shivers up my spine and makes the hairs on the back of my arms tingle with excitement. It’s almost as if he were channelling the spirit of the much missed Patrick Troughton, and if I believed in such things, I’d be accusing Mr. Hines of sorcery and the practising of all manner of forbidden dark arts. But being an enlightened sort of fellow, I’m more than happy to just let him unleash the power of his true craft, and let my imagination immerse me in his performance. And now that he’s been teamed with Elliot Chapman as Ben Jackson, who is, just like Fraser’s Doctor, startlingly good, it’s almost as if the Tardis crew of the Second Doctor’s first forays into time and space has reunited for an additional, and very welcome, brace of adventures.

This time, the Doctor and his companions find themselves in Singapore in 1942, just as the island is about to fall to the advancing Japanese Army. The small band of soldiers and civilians, now including the crew of the Tardis, prepare themselves for evacuation, and while doing so, they realise that they’re not alone, and that one of their number isn’t what, or who, they appear to be. As the party is slowly whittled down, one by one, it’s up to the Doctor to discover who, or what, is preying on them. While the Doctor devotes his energy to unmasking the mysterious assailant, Ben faces every time travellers nightmare scenario, as he comes face to face with a more than familiar figure and with his own life in mortal, and temporal, jeopardy, has to do everything in his power to ensure the safety of his new “friend”. With the war rapidly catching up with all of them, for once, time isn’t on their side.

‘The Forsaken’ manages to not only effectively incorporate and embrace a number of Who tropes, but it also uses them in a surprisingly enjoyable manner to create an exciting and engrossing drama. Tightly plotted and paced, Justin Richard’s story explores similar territory and the same sort of ideas as John W Campbell’s ‘Who Goes There?’, but by transposing them to wartime, opens them up to a slew of different possibilities, each of which is used to its full potential. Plus, it’s always pleasantly surprising when a writer uses the ‘Grandfather paradox’ intelligently and doesn’t try to drown the audience in an ocean of sentimentality and uncalled for emotion. A stumbling block that all too often traps and inhibits authors when they attempt to use it, but one that Richards avoids with comparative ease. With the cast and writer in perfect synchronicity, ‘The Forsaken’ doesn’t put a foot wrong and keeps you in its thrall from beginning to end. More please… Tim Mass Movement