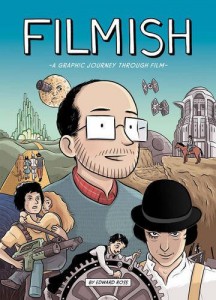 Filmish: A Graphic Journey Through Film – Edward Ross (SelfMadeHero)
Having been enchanted, and enamoured, by film from the first time I experienced it in all its cinematic glory in nineteen seventy seven, I can fully understand and relate to author and illustrator Edward Ross’s all consuming passion for his subject matter. In ‘Filmish’ Ross explores the history of film and cinema using incredibly strict criteria, seven different journeys into the medium. Talking at length about the visionaries who helped build the industry, the outsiders who challenged and changed its “accepted” rules and ideas, and continue to do so, and exploring what he regards as being some of the most important films to have emerged from the lenses and minds of their creators, he slowly builds a startling, innovative, intriguing and intelligent tome. Stylistically, his stark black and white artwork reflects the early days of cinema and film, having an eerie, almost pulp quality that bubbles with an infectious energy, takes you by the hand and guides you through his vision of the impact that film has had on him and the world at large.

His knowledge of his subject matter is exemplary, and while ‘Filmish’ is thoroughly engrossing, it is written from a subjective, and often, highly political perspective that often focuses on sexuality and gender and the abuses that women and anyone not “conforming” to the rigid Hollywood norm have suffered within the film industry. It’s an unusual position to adopt, that at times means that ‘Filmish’ is more akin to the literary equivalent of a teacher / student forum, and feels like Ross is trying to force his perspective on the reader. Which is fine, after all, it’s his book, he wrote and illustrated it, but it does leave the whole thing feeling a little dry as he doesn’t deviate from his rigorous and unalterable position. And even though we share a similar ideology and political sensibility, I couldn’t help but find myself vehemently disagreeing with some of the concepts (especially his take on Disney, but then, maybe my thoughts concerning their product are shaped by the fact that I’m the parent of a twelve year old girl who adores the House of Mouse) that he puts forward in ‘Filmish’. But again, that’s not a bad thing, as good literature, in much the same way as film does, is supposed to encourage debate among its readers. It’s absorbing and entertaining and should definitely please even the most fervent of movie fans. Even if it is a little hard going at times… Tim Mass Movement