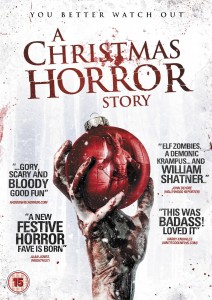 A Christmas Horror Story (Entertainment One)
Christmas, the final frontier. These are tales of the festive season, their intertwined, dark purpose to enlighten, thrill and entertain, to boldly go where no Yuletide horror film has gone before. Or, if you prefer, ‘A Christmas Horror Story’ is a portmanteau film comprised of four separate tales of wintery terror linked by the central character Dangerous Dan, a local radio DJ, played by the man who will always be Kirk, William Shatner. Set in a remote(ish) North American town on Christmas Eve, it spins it’s delicious yarns: a family running foul of Krampus; an undead invasion of the North Pole; teenagers getting far more than they bargained for when their curiosity gets the better of them; and missing children and the things that lurk in the deepest, darkest parts of the woods. Forgoing the usual format of each story being told in a linear fashion, one after the other, the tales are interwoven, occurring simultaneously (albeit in different parts of the same town). As Dan tries to inspire a little Christmas spirit in his stamping ground, the cold embrace of the most wonderful time of the year reaches out for those around him.

Inventive, blackly funny and genuinely frightening, ‘A Christmas Horror Story’ is that all too rare beast, a film that manages to combine humour and scares in perfect measure. While, each of the quartet of offerings is an enjoyable serving of original and hugely enjoyable horrific festive fun, Santa battling to contain the zombie outbreak in his workshops, well and truly steals the show. As does George Buza who plays the no-nonsense, fighting Father Christmas who “defends” himself from the “monstrosities” on his doorstep. And that in itself is no easy feat, as the aforementioned William Shatner is at his absolute, knowing, self-deprecating and sardonic best as the unfortunate and unlucky Dan caught in the centre of the gruesome web. With screams and seasonal cheer in abundance and a humdinger of a sting in its tail, one that you’ll never see coming, ‘A Christmas Horror Story’ will warm the cockles of the even the most ardent disciple of Scrooge and chill the blood of the most devoted gore-hounds. Christmas has come early this year… Tim Mass Movement