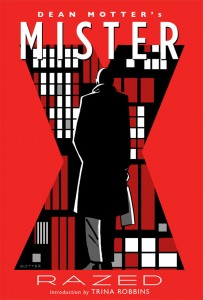 Mister X: Razed – Dean Motter (Dark Horse)
Mister X, believe it or not, has been around since 1984.  He’s had a couple of series, some mini-series and appearances in Dark Horse Comics Presents. His comics have influenced such movie classics as Tim Burton’s Batman and Alex Proyas’ Dark City. But who is Mister X? Well, he’s one of the original architects of Radiant City, a dysfunctional urban metropolis whose Art Deco design is slowly sending the residents insane through the faulty psycho-architecture (I kid you not).  Mister X has made it his mission to correct the errors with the construction of his city. He’s also decided to deprive himself of sleep until the job is done, his sleeplessness being achieved through a cocktail of drugs that he developed himself.  He is helped in his mission by his ex-girlfriend Mercedes and feisty girl reporter Rosetta Stone.

Radiant City is a glorious amalgamation of 1940s styled noir mystery and Fritz Lang’s Metropolis. Flying Cars and robots meld perfectly with trench coats and hoodlums.  This collection comprises several story arcs and takes such varied subject matter in its stride, finding room for zombies, cryogenics, cyborg body parts and much more besides.  It’s all held together with gritty sleuthing and two fisted action in the best Raymond Chandler tradition.  All in all, retro -fiction at its finest.  Motter’s art is simple and effective, evoking Radiant City as the stylized city-sized asylum it is.  Mister X himself is an icon of design being bald and dressed in a trench coat and shades (perfect for projecting that enigmatic air of mystery). For a man who never sleeps he ironically wanders in and out of his own adventures like a dreamer in a dream, appearing when needed but seemingly happy for the narrative to be carried by his exceedingly able supporting cast.

If you’re after something a bit more thought provoking than the usual super hero stories, Mister X’s got you covered.  The stories here are all entertaining. I thoroughly enjoyed the Christmas tale where Mercedes gets the limelight and more than her fair share of trouble through her temporary seasonal job in a department store. Rosetta Stone is also given plenty of opportunity to shine throughout the collection.  There’s action, adventure and did i mention the zombies?  If you have more than a passing interest in science fiction or detective mysteries, you owe it to yourself to pick up a copy of Mister X: Razed. Paul Ferriday