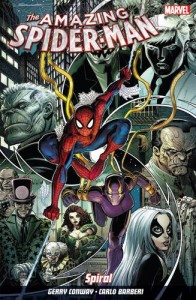 Amazing Spider-Man: Spiral – Gerry Conway & Carlo Barberi (Marvel / Panini)
With all the excitement, drama and hullabaloo of Otto Octavius taking over Pete’s body and Spider-Verse, it’s been a while since we’ve had a good old fashioned Spidey story and “Spiral” is the tale that might just fill that gap in the lives of web-head fans everywhere. But if you’re going to tell an old school Spider-Man story, you need an old school Spider-Man writer, and who better to fill that role, than Gerry Conway? The man has radioactive spider blood in his veins, having been responsible for some of the most definitive Spidey stories ever. And when I say ever, I mean EVER. Remember when Gwen (Stacey) died? That was Gerry. Or when The Punisher entered Pete’s life and made his debut on the streets of New York? Yeah, that was Gerry too. So, when I tell you that we’re not only in good hands, but that Gerry has lost none of his Spidey- mojo in the time he’s been away, you’d better believe that that’s a fact Jack.

The thing about crime bosses, as Spidey will no doubt attest, is that no matter how much they’ve got, they always want more. With Kingpin being yesterday’s news, it was inevitable that someone would eventually want to take over his territory and make it their own, but when Mr Negative starts playing the cops against his competition, things take a turn for the worse. At least they do for Yuri Watanabe, who having lost her mentor and being bound by procedural red-tape, begins taking the whole underworld struggle to grab a piece of Kingpin’s action, a little too personally. Which means that if she’s going to get the job done properly, The Wraith is going to have to come out of retirement. As Mr Negative continues to whisper in her ear and betray his “comrades in arms” for his own gain, the “war” hots up, and guess who’s stuck in the middle? That’s right folks, your friendly neighbourhood Spider-Man. Caught between wanting to do the right thing and wanting to help his friend, Spidey once again finds that it’s impossible to emerge unscathed when you’re being batted back and forth by the rock and the hard place. The more things change, the more they stay the same, and Pete will always be a victim of the Parker luck. Pulse pounding adventure and thrills abound in ‘Spiral’, which nails everything a Spider-Man should be then steps back, dusts itself off and dives straight back into the maelstrom of frantic and frenzied Spider fun. Oh, and damn, it looks good, with Barberi delivering the goods in cerebrum melting, mind blowing style. Gerry and Carlo just knocked it right out of the park… Tim Mass Movement