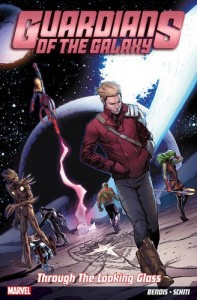 Guardians of the Galaxy: Through the Looking Glass – Brian Michael Bendis & Valerio Schiti (Marvel / Panini)
One of the inescapable facts of life is that nothing lasts forever. Everything has its moment, burning brightly with a fleeting beauty before fading out and joining the vast, cold oblivion of eternity. The same eternity that will one day disappear as it’s consumed by the heat death of the Universe. Like I said, nothing lasts forever. Not even the Guardians of the Galaxy. And in ‘Through the Looking Glass’, the team whose bonds of brother and sisterhood were forged when every other sentient being in every solar system was either pointing a blaster at them, or encouraging everyone else to do so by putting incredibly large, and attractive bounties on their heads, have seemingly reached the end of their journey together. It would seem that the events set in motion by The Black Vortex and their fallout, and the ousting of an Emperor by his son were too much for even Peter Quill, Venom, Groot, Rocket, Drax, Gamorra and Kittie Pryde to bear. ‘Through the Looking Glass’ is the story of what happened to the Guardians in the aftermath of the Vortex affair and the tale of how a pirate finally fell in love and somewhere along the way, became a King.

The events of ‘The Black Vortex’ have pretty well been charted, but it’s always a pleasure to re-read them, as each time the minutia provides another tantalising arc, another perspective and another glimpse at how close everything nearly came to ending at the hands of power crazed, former dictator. But ‘Through the Looking Glass’, while providing everything I’ve just mentioned, is about so much more. It’s about a collection of warriors coming to terms with what happened and embracing their destiny as part of something much larger than themselves, and as they take control of Spartax (legally, for once, I might add), it becomes increasingly apparent that even they can’t escape Uncle Ben’s First Law. Because try as they might to avoid it, following an attempted invasion of their new domain, an invasion driven by vengeance, even they can’t deny that ‘with great power, comes great responsibility’ as one of their number does the honourable thing and heads out into vastness of space to follow their own path. With one of their core members gone, can the team survive? Only time will tell, but with ‘Secret Wars’ weaving i’ts dark magic on them, it doesn’t look good. Brain Bendis once again proves why he’s the uncrowned emperor of the Marvel Universe with a tale that runs the emotional gamut that’s packed full of edgy, dynamic dialogue and characterisation. Which, in turn revolves around an intricately woven plot caught in the embrace of the end-game and brought to eye-popping life by the phenomenal art of Valerio Schiti? It’s been one hell of ride, and if this really is the end of the Guardians as we know them, then at least they’re going out with one heck of a bang. Nothing lasts forever. But I really, really wish the ‘Guardians of the Galaxy’ would… Tim Mass Movement