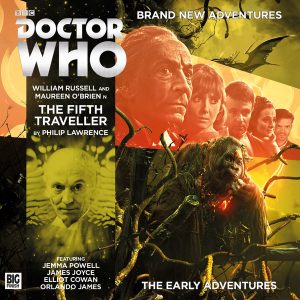 A long time ago in a decade far, far away, Doctor Who was enjoying its first golden age. Dalekmania was at its height and the good Doctor was proving to be a sure fire hit for the BBC as kids and adults alike watched him, Ian, Barbara, Vicki and Jospa have thrilling new adventures every Saturday night. Hang on…. Jospa??? Who’s Jospa I hear you ask? Ah well, that’d be telling, however he’s very much a part of the TARDIS team in The Fifth Traveller. But where did he come from and how did he come to join The Doctor and his companions?

The Fifth Traveller starts off with a bang, as the crew of the TARDIS flee for their lives from a hostile alien army that pursues them back to their time machine. Narrowly escaping the alien force, the Doctor and company then arrive on a strange primitive world inhabited by the ape like Arunde and it’s not long before the curious explorers get themselves into all sorts of bother and the mystery of Jospa begins to unravel.

Personally, I was looking forward to The Fifth Traveller as I’ve always had a soft spot for 1960’s Who, especially the William Hartnell era. It’s interesting, hearing William Russell playing both the ever innovative and dependable Ian Chesterton, and the Doctor and, not surprisingly at William’s age he now sounds more like the Doctor than Ian, but that’s only to be expected as the longest serving member of the Tardis crew is now well into his ninth decade. Maureen O’Brien also slips effortlessly back into playing Vicki and again it must feel strange for the two leads to be playing characters that are young enough to be their grandchildren, but they do it and do it well. And as for the story, well, that’s a glorious combination of adventurous jungle thrill ride and surreal dreamlike tale with plenty of intrigue and suspense thrown in. It’s time to return to the halcyon days of the First Doctor’s era… Nath Rixon