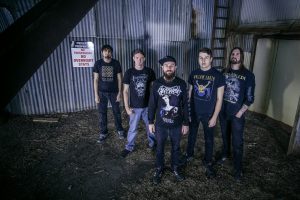 I’ll be the first to admit that I haven’t been listening to Allegaeon for a long time. The first song I heard by the band was Threshold of Perception from their 2014 album Elements of the Infinite. There was just something in the music that immediately drew me to it. The darkness of then opening orchestral movement that segued straight into the heaviness of metal, it was immediate and instantly appealing. From that point on, I kept my ear to the ground and my eye on the band, springing into action whenever they released something new. Founding member and guitarist Greg Burgess spoke to Mass Movement about Allegaeon and the band’s new album Proponent of Sentience …

MM: I like to start out with a line from the film Almost Famous as it encapsulates everything. What do you love about music?

GB: Music transcends words, it expresses emotion without being a tangible thing.   It’s mood altering, it is what I value more than anything on this earth.

MM: What music influenced the band? What made you want to make music for a living?

GB: The influences in Allegaeon are vast and varied. Megadeth, Dream Theater, Soilwork, Nevermore, Arch Enemy, Death, and Cynic are a main focus of where we’ve come from if I had to choose only a few.

MM: Your first albums were judged as being almost too technical at the cost of the music, what did that do to help push your music to what it is now?

GB: That’s a criticism that I’ve literally never heard before, so I can’t give you a solid answer. I can say that our writing contributors have changed subtly with lineup changes over the years.

MM: Your new album Proponent of Sentience has been receiving great reviews, mine included. What was the recording process like this time around?

GB: Working with Dave Otero is always a fun and rewarding experience. Dude knows his metal and he’s a good friend to the band. We came in way more prepared than we have ever been before, and I think everyone really excelled at their portion of the tracking.

MM: What made the band decide to do a concept album and did that change your approach to the music and lyrics this time?

GB: Fragments Of Form and Function was a loose concept record, one in which Formshifter exploited. There was no moment of clarity that happened and we just said let’s do a concept record, it just became one through the writing process. One of the sonata movements lead to writing another one, which lead to another one. It was a very organic process.

MM: What do you hope to accomplish in the future for you personally and for the band?

GB: Our main goal is to become more of a global entity. Not just one that exists and tours here in the states, and Canada. It’s very important to us as a whole to transcend those boundaries and to reach a lot more people with what we do. For me personally I really want to focus on my personal career as a guitarist. The more notoriety we get as individuals only helps the band as a whole. 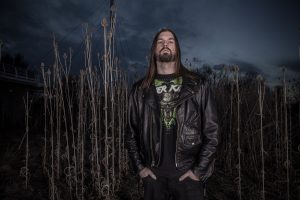 GB: The sacrifice I think. It takes its toll on relationships you have. You miss important days, anniversaries, weddings. Your personal life takes a sideline to your professional life. Also your health suffers a bit. It’s hard to go to the gym when you’re traveling all the time, and eating fast food really runs you down.

MM: What has made you just stop in your tracks while out on tour and just go “Wow…..that is really screwed up”?

GB: A lot actually. The music industry is a wreck and the way things seem to go is very confusing. One of the biggest pet peeves I have is with merch cuts. If a band comes in a brings a lot of people, they make bar sales and door sales and all these things, then on top of it they want to reach into your pocket and take a percentage of your property, that is screwed up. They have to realize that we paid for that merch out of our pocket, why the hell do they get a cut? Merch sales are where a band can actually make money on a tour, and yet they feel they are owed a piece.

MM: And what was one of the most wonder filled moment you have had while out on tour?

GB: Seeing new places is the best part of it. Meeting new people making new friends that you would never have made without the band is really gratifying. Music can bridge cultural differences and really unite people. The effect that your music can have on other human beings is beyond rewarding.

GB: Right now its a large list of bands that we look up to, and also bands that would help us reach a larger audience. I think that a tour with Lamb of God, The Black Dahlia Murder, or like Carcass would really help us reach fans that would like us. I feel we have enough in common with those groups that our fan base would increase drastically.

MM: It’s no longer hard to see that the music industry is changing and some would say that it’s spiralling toward a crash. What do you think of the way the industry is moving and do you see it digging itself out before it ruins itself or do you see it imploding under its own weight?

GB: I’m not a business man, I see a disaster in front of my eyes, however I have no idea how to fix it. Fans have the power, they’re the ones that purchase music. I can forsee the industry shifting more into fans supporting the bands by helping them survive and less about the music. The value we place on music today is pathetic. A song I spent 2 years on and costs us thousands of dollars to record gets valued for 99 cents. It doesn’t equate to me.   Someone way smarter than me will have to figure it out.

MM: What do you like to do to unwind?

GB: I play classical guitar a lot. Some video games, some movies. Hanging with friends is also great.

GB: I’m not sure what’s coming out in either form to be honest, I’ve been out of the loop for a while.

Proponent for Sentience is out now