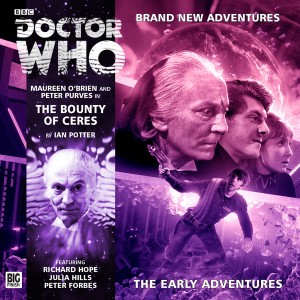 Doctor Who: The Early Adventures: The Bounty of Ceres – Performed by Peter Purves, Maureen O’Brien, Julia Hills, Peter Forbes & Richard Hope & Written by Ian Potter – 2xCD / Download (Big Finish Productions)
As much as he rails against the Timelords interfering in his life, their occasional dabbling in his affairs are nothing when compared to the way the Universe conspires against him, continually altering his fate by ensuring he arrives where he’s most needed instead of where he wants to be. Oh, I’m sure The Doctor believes that it’s all one great big happy accident, but these random effects can only be considered coincidence for so long before they’re eventually seen for what they really are: a deliberate set of circumstances put into motion by a higher intelligence. And given all of the wonders of Time and Space, is it too much to believe that the Universe itself could be a sentient creature? One whose conscience forces it to act in the only way it knows how, by sending one of its champions, in this case, The Doctor, to do the things that it can’t, saving the lives of millions (and even itself) time and time again? Whether you believe in the in the idea of a capable and resourceful Universal entity or subscribe to the more popular notion of accidental and fortuitous occurrence, this time The Doctor and his companions, Vicki and Steven are forced to land on Ceres after the installation of a component “borrowed” from the Monk’s Tardis goes disastrously wrong, placing The Doctor and his friends in the one place in space and time that they’re most needed and when they’re most wanted.

‘The Bounty of Ceres’ is, at the end of the day, a story based on that most tried and trusted of Who scenarios, the base under siege. Finding themselves on a mostly automated mining colony (whose function means that it needs only three crew members to run it) on the dwarf planet Ceres, the crew of the Tardis and their new friends soon find themselves at the mercy of their environment when things begin to go disastrously wrong, placing all of their lives in danger. As they start uncovering the truth about their situation, they stumble across a terrifying possibility, one that could change the face of the solar system forever, but the more they discover, the more The Doctor realises that the reality of what they’re facing is much colder, far more calculating and chilling than he first thought and that the horror inside the colony is far more frightening than whatever may be lurking outside.

Ian Potter’s story feels like a classic Who tale from the get go, the sound design, dialogue and plot are all so precise that when the story unfolds in your mind, it doesn’t do so in colour, it does it in black and white, filled with archaic and retro technology, robots, action and the Doctor saving the day while Vicki and Steven do all of the hard work. And talking of Steven, Peter Purves’s impersonation of William Hartnell’s Doctor is hauntingly realistic and when it’s coupled to a fantastic cast and hugely enjoyable, and thoughtful (questioning as it does concepts of intelligence and the effects of long term exposure to the harsh realities of living and working in space) romp as it is in ‘The Bounty of Ceres’, it gives everything an extra push, and if you didn’t know better, while listening to the tale unravel, you’d swear you were back in the sixties. Marvellous stuff… Tim Mass Movement