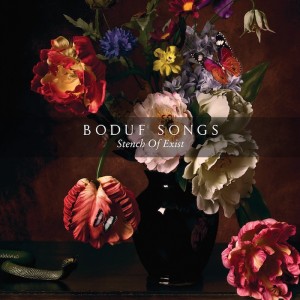 Listen to Boduf Songs’ “My Continuing Battle With Material Reality” here on Noisey.com.

England/Ohio’s Mat Sweet will be releasing another album under the Boduf Songs moniker on February 3rd via The Flenser. Titled Stench Of Exist, this 11-song LP feels at once like the most accessible Boduf Songs record and at the same time, the most esoteric. From the opium flow of the tracks, running heady into one another like tributes to river, to the muted-industrial-electronic-effected drums underscoring the spiraling melodies and fluttering drones, to the clean and rich guitar, abstracted cycles and feedback walls, Stench Of Exist feels dark, like whispered doom metal masquerading as a lullaby.

Boduf Songs began in 2004 as a predominantly acoustic project, in the form of a self-titled record made by Mat Sweet in his small chambers in gloomy Swaythling, Southampton, England with a modest set-up centering around a mini-disc recorder and a PC with a 4Gb hard drive. In 2006, the follow-up Lion Devours The Sun refined the stripped-down sound into darker forests and denser compositions, exploring the same themes with increased deliberation and experimentation. 2008’s How Shadows Chase the Balance expanded the palette further beyond the acoustic finger-picking and into shimmering electric territories. “…A record filled with obscurity, secrecy, and wickedness” according to Brainwashed.com. In 2010, Sweet brought us This Alone Above All Else In Spite of Everything, featuring new levels of howling despair, still filtered through a stoic, disarming, calm; “My hammer feels the urge/ To nail you to the ground/ To smash one through your cheek/and splinter into wooden floorboards.” For 2013’s Burnt up on Re-Entry, Sweet underscored the heavy and experimental undertones found on This Alone with more electronic elements, as well as occasional scorched-earth guitars. The album was hailed as “despairing and unfriendly… the richest and most surprising Boduf release yet” by Pitchfork.

Boduf Songs‘ newest material on Stench Of Exist is still shadowy; a drowsy, druggy, dreamy record that unfolds languorously, laced with mysterious electronic filigree. Stench of Exist is gorgeously intimate and transforms the minimal into maximal with layers of electro-detritus wreathed in lush guitar strums, street-side field recordings, reverberating pianos and softly crooned vocals. It is a record of rain and cities and night-time. The collision of arabesque tonality with the electronic sound and ambiences brings to mind the promise of Blade Runner – half-asleep at 4am and slightly medicated, with the pyramids and flame spewing cityscape and eggshell-within-eggshell pronouncements in downpour glowing against the fluttering eyelids in the almost-dreaming unter-mind. The dream version, wherein Rachel has faux-cellular brain and heart cancer and Deckard is a figment of her dwindling, mournfully constructed pseudo-psyche, itself the wavering hallucination of a dying opium fiend in Calcutta sucking up death as his brittle bones cave in on themselves, in flickering, vignette-heavy, inky-black monochrome. A record for saturnine commuters, on headphones, after sunset.