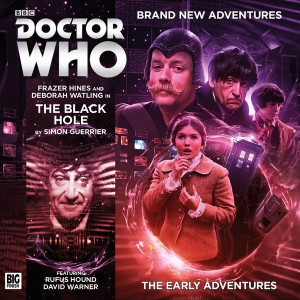 I can’t help it. Whenever I hear Frazer Hines playing Patrick Troughton playing the Second Doctor, I get goose bumps, my spine starts tingling and just for a moment I forget that it isn’t really him flying off in the Tardis to who knows where and whenever in time and space.  It’s an uncanny portrayal of the character and the man who originally brought him to life and every single time he embarks on a new adventure, it makes me believe that maybe, just maybe, there really is a little bit of magic left in the universe. Because despite everything I know to the contrary, it feels like the Second Doctor is still here, in spirit at least, and if that isn’t the stuff of mystery and wonder, then I don’t know, or want to know, what is.

Having run into an uncharted celestial anomaly, The Doctor, Jamie and Victoria materialise on what they first assume is a scientific vessel based on the edge of a black hole. They soon realise, much to their surprise, that their supposed research based craft is not only a thriving, fully functional colony, but that its inhabitants have no idea that they’re hovering on the precipice of the event horizon of one of the most destructive forces in the galaxy.  Beset by irregularities in the flow of time, and having discovered that as there was no supernova, the only way that the black hole can exist is if it was artificially created, the Doctor and his companions determine to find out exactly what’s going on and stop it before any more damage is done. As usual though, that’s easier said than done and before the adventure reaches its conclusion, the Doctor, Jamie and Zoe fall prey to an almighty deception, find themselves fighting off an alien invasion, forge a partnership with an unlikely ally and come face-to-face with an old foe whose meddling is responsible for all of their woes.

Simon Guerrier’s drama is soaked in nostalgia and reeks of a bygone age of the Whoniverse. It’s steeped in the Second Doctor’s era, the tone, pace, performances and plot all feel like they could have emerged straight from 1967. And that, as I make no secret of the fact that Number Two is one of my top five, is almost certainly the reason I found myself listening to ‘The Black Hole’ over and over again, mesmerized by both the story and its attention to detail.  It’s like the best of yesteryear has been given a brand new make-over, emerging from the ashes like some Tardis shaped phoenix to enrapture its audience and capture their imagination all over again. It’s true you know, sometimes older really is better…  Tim Mass Movement