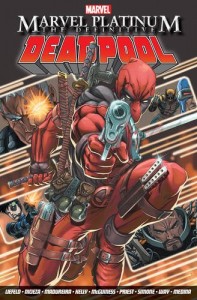 What a difference a decade can make. Ten years ago, if you’d asked the average Joe or Josephine who Deadpool was, they had either mumbled something about a Dirty Harry film or started at you blankly and replied “Who?” But thanks to the sheer persistence of the books’ many creators (who over time have pushed the envelope further and further in terms of content, excitement and the sheer lunacy of some of ‘Pools story-arcs), the devotion of the numerous global cosplayers who have assumed his identity, plus an ever increasing readership and the persistence of a certain Mr Ryan Reynolds, Deadpool – aka Wade Wilson – aka the Merc with a mouth – is a now a household name.  And with the imminent arrival of Wade’s first solo foray into the moving image, the good folks at Marvel and Panini decided it was about time that his expanding fan base were brought up to speed, and date, with Deadpool’s wonderfully insane history.

From his four colour debut, through his origin story, his initial rejection by, and later return to, Weapon X, his ongoing romance with Death, involvement in the Civil War that ripped the Marvel Universe to pieces, his long-standing feud with nemesis T-Ray and even his war against the Presidential undead, it’s all here, collected for your reading pleasure in this mighty tome. However, that’s an awful lot of mythology and canon to try and cram into one book and in order to feature some of the best Deadpool moments, “The Definitive Deadpool” skips through the character’s history, which gives it a slightly disorientating, disjointed feeling. That said, the stories on offer more than compensate for the initial confusion, which if I’m honest soon dissipates as you sink ever deeper into Wade’s psychosis. One of the most appealing facets of Wade Wilson, his verging on the edge of and then leaping into the loving embrace of madness,  is explored fully, allowing you to get to grips with Deadpool as the man, the myth and the legend are laid bare for the entire world to see. It’s a funny, violent and sometimes brutal tale of love, loss, murder, more loss and more murder that perfectly illustrates why Deadpool is one of the hottest properties in comics, and Hollywood, at the moment. The writing and art work in synchronisty throughout, each mirroring and reflecting the other, their harmonious relationship meaning you can either dive straight in and consume it completely in one glorious afternoon (as I did), or dip in and out as you see fit, which I imagine would exponentially increase the many pleasures that this book has to offer. It’s Superhero History 101, and damn, it’s good. Really, really good…  Tim Mass Movement