Warning: preg_match() expects parameter 2 to be string, object given in /var/www/vip4/sites/vip6102689/httpd/htdocs/wp-includes/formatting.php on line 4866
 The Chronicles of Conan Volume 30: The Death of Conan and Other Stories - Mass Movement
x
Spread the love 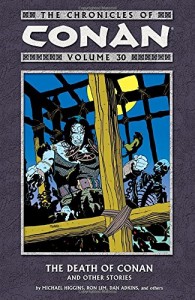 Robert E Howard’s Conan stories were the first fantasy, or more accurately Sword and Sorcery, stories that I read as a child, and Roy Thomas’ adaptations of those tales for Marvel were among the first comics I remember reading.  I was entranced and captivated by both, and to this day, both are a staple part of my literary diet; I couldn’t realistically count the number of times that I’ve returned to the comics and collected volumes of the Cimmerian’s escapades, reading, and thoroughly enjoying, them time and time and time again. ‘The Death of Conan’ collects one of the later story arcs, originally published at the tail end of 1990 and into the beginning of 1991, that appeared less than two years before Marvel cancelled the book for good. By this time Roy Thomas had long since departed (and I’d stopped reading the comic as alcohol, punk rock and women had started me on my journey down the long and winding path to wrack and ruin), and Michael Higgins and Justin Arthur had assumed writing duties and in doing so, decided to explore the character’s origin and his early days as a sword for hire, adventurer and thief.

Higgins begins Conan’s story shortly after his birth, as the infant is subjected to a Cimmerian rite of passage. Having “proved” his worth to his people, he begins his journey to young adulthood (or as the kids call it, teenhood) when he starts venturing out into the world. It’s here that he meets his first true friend and also his first love, and where he first runs afoul of sorcery and those who wield it. Caught in a deliciously convoluted long game that reveals itself slowly, tantalising its readers with clues and throwing them occasional scraps, the plot sinks its claws into you and refuses to let go until it rewards you with the big reveal in the closing chapter. And you know what? It’s worth the wait. This tale of honour, kinship, betrayal, loyalty, revenge, murder, dark magic, love and loss grabs you in a bear hug and refuses to let go, until your eyes nearly pop from your head and you’re gasping for breath. Okay, so maybe that’s a slight exaggeration, but the artwork is deliciously detailed and gory enough to keep even the most bloodthirsty fan happy and might, if your constitution isn’t fairly robust, make your eyes bulge a little and the story unfolds in rapid fashion and might (again), if you’re a wheezy asthmatic, have you reaching for your pump. So don’t say I didn’t warn you, because, you know, I obviously did. Welcome to the days of high adventure…  Tim Mass Movement