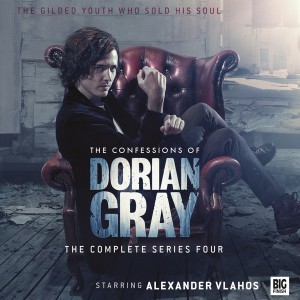 I am a relatively simple creature. Morose, melancholic and misanthropic by nature, I have relatively few (compared to the rest of the species) pleasures in life, so those things that I choose to embrace are clung to with a vigour and enthusiasm that belies my character. ‘The Confessions of Dorian Gray’, the tales of the immortal who sold his soul for eternal youth and beauty, are one of the aforementioned joys. The ever evolving, and interwoven, story of Dorian’s life never fails to entertain; the secrets and complexities of the eponymous hero’s existence revealing themselves through his unending encounters with the supernatural, arcane and mysterious. As you’ve probably guessed by now, I’m a bit of a fan and ‘Series 4’ continues in fine form, demonstrating all of, and adding to, the qualities that make ‘The Confessions of Dorian Gray’ so enjoyable.

Returning to the part narrative, part drama format abandoned by the last series, these latest tales find Dorian in the company of Norse gods and monsters, computers on the verge of self-awareness, mythological sea monsters, family spectres and lycanthropes. He’s haunted and hunted by his past and the inescapable memories of his surroundings and stumbles into tragedy after meeting his doppelganger.  While each of the stories taken from Dorian’s long life has a foundation in the realm of horror, their power, the thing that draws you into and involves you in each of them, is the human drama. The raw, emotional wallop that each tale derives from the solid, believable characterisation and the interaction between them that lies at their core. It sounds crazy, I know, but this series has a sense of realism that others of its ilk forsake as they pursue escapism rather than focussing on the thing that really makes a story. That is, the people, characters, players, call them what you will, they’re the vital ingredient that can transform a good yarn into a fantastic epic. And throughout his many adventures, Dorian, as well as being one himself, has met a lot of wonderful characters, some of whom he shares the stage with in his many varied, curious, absorbing and entrancing confessions.  Yes, the content is more adult and, at times, a lot more graphic than the normal Big Finish fare, but if you’re looking for well-written, incredibly well performed drama that’s a little out of left field, then you’ve come to the right place, because ‘The Confessions of Dorian Gray’ has all of that in spades, and a great deal more besides.  If you’ll allow him to, Dorian has sights and wonders beyond belief to show you…  Tim Mass Movement