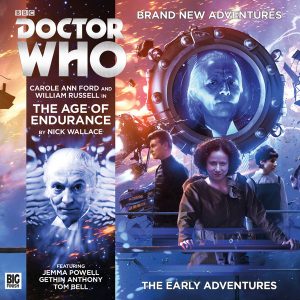 Set right at the start of the televised adventures, The Age of Endurance kicks off in a familiar vein with the TARDIS materialising on board an unknown spaceship. After some brief exploration, a group of soldiers appear and the First Doctor and erstwhile crew Ian, Barbara and Susan realise they’ve found themselves (not for the last time) in the middle of a war zone. It isn’t long before the team are split, with Barbara captured by the enemy, and as warships manoeuvre around each other as both sides try to out-think their opponents, the Doctor and his friends find themselves locked in a race for survival. In this war there is no ‘good’ or ‘bad’ sides; just those all-too-human shades of grey we are trying to navigate. This begs one question: will anyone survive long enough to claim victory (or any sort of moral high ground)?

Whilst listening to The Age of Endurance I visualised the adventure in black and white. It seemed appropriate for a Hartnell story, and made the experience creepier. So yes, we’re presented with a rather traditional tale here, but at the pace of the modern stories we watch today. This means no endless exposition or hours spent navigating corridors here: just a fast paced story with a familiar feel.

In summing up, I’d suggest that this is one for those of you who dip your toes in Doctor Who waters but have no interest in the accuracy of River Song’s timeline or whether Cybemen come from Telos or Mondas. Here we have a simple story, free of the constraints of story arc or character development. And don’t get me wrong – that’s no bad thing.  Bex Ferriday