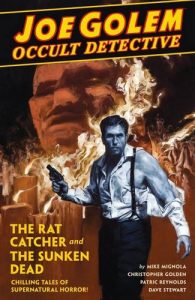 There are few writers able to weave compelling tales of strange realities, alternate histories and dimensions slightly askew from our own and the denizens, heroes, demons and monsters that inhabit them.  Most of those that do usually follow or take some inspiration from, no matter how loosely, the work of, and the path laid down by, H.P. Lovecraft.  Both Mike Mignola and Christopher Golden (along with Neil Gaiman, Alan Moore and a further select few) are among that all too rare breed, and their latest creation Joe Golem: Occult Detective is a testament to their razor sharp imaginations and finely honed powers of invention, as it adds a deliriously enjoyable extra layer to the rich literary pantheon of the arcane, mysterious, supernatural and weird that they are responsible for creating. Set in a New York that was devastated by a massive Earthquake and flooding some four decades previously, Joe Golem investigates the rum and downright odd in the place now known as the Drowning City; and in this, the first volume of his chronicles, business has never been better.

Whether he’s saving orphaned children (moulded straight form the blueprint created by Fagin) from the horror that lurks beneath the winding waterways of the cities less desirable neighbourhoods, or teaming up with his mentor to prevent the drowned citizens of old New York returning from the grave to wreak their vengeance on its present inhabitants, Joe Golem always comes through.  Plagued by monsters and the undead, Joe and Simon Church (the previously mentioned mentor) are the Drowning City’s first line of defence against the things that go bump in the night, and they’re not going to go down without a fight and have no intention of going anywhere quietly, not into any darkness no matter how gentle, until their work is done.

Patric Reynolds and Dave Stewart  have fabricated the perfect tapestry for Mignola and Golden to tell their tale, as their vision of the New York that Joe calls home is more akin to a downtrodden, filthy, nightmare noir Venice than the populist image of the city that’s inextricably fused into the mainstream conscience thanks to its omnipresent role in all aspects of culture. It’s peculiarly striking and oddly beautiful, serving as a wonderful reflection of its downtrodden natives who cling to, and reach out for, any small morsel of happiness they can. And they do, making the most of what their world has left to them.  The characterisation is flawless, Mignola and Golden revealing just enough about their hero to grab, and hold on tight, to your attention while teasing us with snippets of the brooding, black history he’s “forgotten” and offering an all too brief, and fleeting, explanation of how he and his colleague “met”.  These tantalising offerings, coupled with the Chandler-esque ,flavoured with a sprinkling of Wheatley and a dash of old Howard Phillips, story-telling, that’s layered with plots within plots within…Well, plots, catapults Joe Golem to the very pinnacle of the macabre mountain and leaves you thirsting for more.  Much, much more.  The Drowning City awaits… Tim Cundle