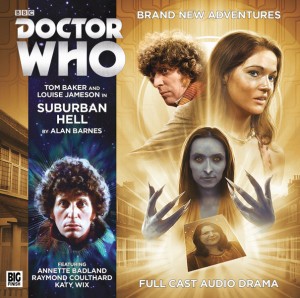 Doctor Who: Suburban Hell – Starring Tom Baker, Louise Jameson, Annette Badland, Alix Dunmore, Katy Wix, Raymond Coulthard & David Richardo-Pearce & Written by Alan Barnes – CD / Download (Big Finish )
Hell is different for everyone. Bosch and Dante presented their visions of it in great detail, while Sartre famously claimed that it was other people, but for the majority of people, the Devil and his dwelling lie in the details, hidden away in the minutia of the, more often than not, terrifying world in which we live. For me though, one of the many levels of Hell (and if it exists, there will be many, many levels to travel through for all eternity, each worse than the last) is the picture perfect, claustrophobic prison commonly known as suburbia and it’s endless rows of identical housing that slowly eat away at your sense of individuality and identity until you become another wage salve robot trapped in never ending neighbourhood game of ‘Keeping Up With The Jones’. That’s what Hell will be like for me, Suburbia stretching out into infinity, and in ‘Suburban Hell’ it’s where The Doctor and Leela find themselves deposited by the Tardis which promptly vanishes thanks to a time anomaly that needs to be fixed quick smart if they have any hope of ever seeing their ship again.

Cast adrift in suburbia, The Doctor and Leela soon discover that the greatest secrets are often hidden behind seemingly innocuous closed doors, and are soon battling for their lives (and those of not just their dinner companions, but every free person in the Galaxy) against deranged alien cultists determined to bring their mistress back to life in a time and mind bending plot involving the mysterious disappearance of a family, possession, witch finders, quarrelling couples, chronal tunnels, social etiquette and murder in, yes, you guessed it, suburbia. This time, The Doctor and his savage need to keep their wits about them at all times, because if the monsters don’t get them, the dinner conversation and cocktails will.

‘Surburban Hell’ is a wonderful, darkly comic, fantastic new twist on base under siege tale that’s feels like a Tobe Hooper remake of ‘Abigail’s Party’ with an extra dose of weirdness thrown in for good measure. It’s witty, sharp and has no end of fun tearing up, and through, the conventions and stereotypes of seventies suburban life (but has the good taste to avoid the whole fruit bowl full of car keys scenario’s that ended up destroying many a street) and the cast have a tremendous (well, it sounds like they did) time bringing it to life. Fantastic… Tim Mass Movement