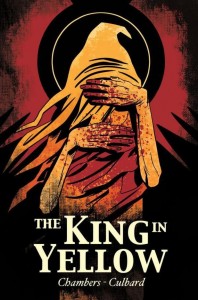 The King in Yellow – Robert W. Chambers & I.N.J. Culbard (Self Made Hero)
‘The King in Yellow’ is one of those infamous books that I always meant to get around to reading (mainly because of the way it influenced Lovecraft and his work), but never quite found the time to do so, and is possibly the title that I most regret never making the time to discover. Now, having read this adaptation of it, I regret not having read it more than ever. That said, and still reeling from, and inspired by Culbard’s alluring and enchanting reimagining of the book, it’s a mistake that I aim to rectify as soon as possible.

Rather than a singular literary narrative, ‘The King in Yellow’ is comprised of three very different tales, stories of three friends all of which are linked by the presence of a book entitled ‘The King in Yellow’, and the impact that it has on their lives. Supposedly a tome that drives whoever reads it insane, ‘The King in Yellow’ casts it’s strange magic on each of the men in turn, as plans for world domination interwoven with madness, unrequited desire, love and dreams haunted by a sense of unfolding dread and a terrible presence seeking that which man should not have. Blurring the line between reality and fantasy, the real world and that which lies beyond the veil, ‘The King in Yellow’ weaves it’s ethereal and enchanting charms on its audience, abandoning them somewhere between the spectral and physical worlds, it’s beautiful artwork and engrossing prose capturing both imagination and soul, refusing to let go of either until long after the book has been finished. Like all of the best works of fiction, Culbard’s ‘The King in Yellow’ stays with you, whispering curious questions whose answers are best left unknown, tempting you to lose yourself in its pages again, which you almost certainly will. Time and time again. If Chambers original work is even half as good as Culbard’s adaptation, then its reputation is well earned. Superb… Tim Mass Movement