Warning: preg_match() expects parameter 2 to be string, object given in /var/www/vip4/sites/vip6102689/httpd/htdocs/wp-includes/formatting.php on line 4866
 Doctor Who: Short Trips: The Way of the Empty Hand - Mass Movement
x
Spread the love 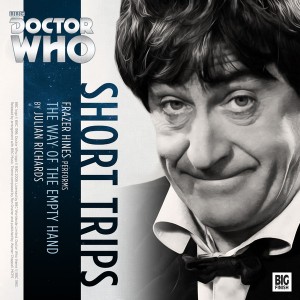 Combatia: a mechanised planetoid known colloquially as a War World. Like other war worlds, it travels the galaxy silently snagging the greatest potential warrior from each planet it visits, forcing them to fight to the death within the planetoid’s vast arena.

The TARDIS (containing the Doctor’s second incarnation and companions Jamie and Zoe) materialises on an idyllic planet, and Jamie’s immediate excitement at visiting such a beautiful new world sees him rush through the TARDIS doors without thought. He is, of course, snatched immediately by the passing war world.  And so listeners quickly find themself on familiar territory; The Way of the Empty Hand framed as a hybrid of a familiar genre – the gladiator fighting for his life purely for the entertainment of others – and, to some extent, Troughton’s own televised swansong, The War Games.

Of course, the best way for the Doctor and Zoe to rescue their over-enthusiastic companion is to follow him to the war world. This they do, and are immediately captured and presented to the Combatia’s Overlord: Corpulus the Magnificent. (Think Jabba the Hutt with more cohesive speech patterns.) Never one to wield a weapon (unlessabsolutely necessary) and armed with nothing more than guile and the gift of the gab to manipulate his opponents, the Doctor enters the arena…

It’s not just Jamie and the Doctor who get to have all the fun here. Yes, this feels like a Troughton-era story, but it’s still very much of our time. In the late sixties, Zoe would have had to endure being relegated to little more than a scantily clad attendant of the Overlord, the script ensuring that she was no more than eye candy for the dads. Here, she does become an attendant, but shines rather than simpers, using her own quick wit and logic to assist the Doctor and help win the day.

Overall then, this is a fresh, fast-moving and thoroughly enjoyable tale, and this comes across as much in Frazer Hines’ delivery as the story itself. Hines is clearly enjoying himself, and reads the script with enthusiasm and relish, and the way he channels Patrick Troughton’s portrayal and vocal tics is often spookily accurate.

Coming in at just over 25 minutes forces the story to rattle along no time for lengthy exposition.  And this is so much for the better. Author Julian Richards keeps it simple and tight and as a result, I can think of few better ways to spend a spare half an hour in the bath, or while making dinner. I had a ball listening to this and guess what? I think you will too. Rebecca Ferriday