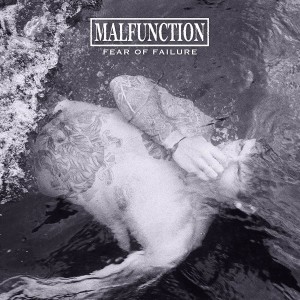 If you’re going to name your band after one of the finest tracks, by one of, if not THE finest hardcore band ever, then it suggests that you have complete confidence in yourself and that your band are that good. Fortunately for MALFUNCTION, they do and they are. Coming from the often overlooked Buffalo New York scene, which spawned such acts as Snapcase, Despair, Every Time I Die and Buried Alive, “Fear of Failure” (the follow-up to their 2012 “Finding My Peace” EP) is their first release since signing with Bridge Nine, and it doesn’t disappoint.

“Fear of Failure” borrows elements from all those aforementioned Buffalo bands, as well as adding a huge dose of classic NYHC groove ala Madball and Breakdown. The songs themselves don’t stray too far from that path, but when it’s done this well, then who cares. It’s often the simplest riffs that prove most effective in hardcore bands and the album’s title track is a good example of this a slower groove that allows frontman Zak Quiran to roar about loved ones destroying themselves.  Track 3 “Cut Off” is a rampaging track with some nice Snapcase-style harmonics and there will be carnage in the pits when they play “Final Thoughts”, a blistering track with a beatdown ending to end them all.  This could also be said for the raging “Guilt”. People will get hurt. The pace slows down for the instrumental “Sonic”, but that’s not say that this is easy listening. No vocals needed here, the pain is in the music. The album ends as it started with 2 tracks of brutal hardcore, that other bands wish they’d wrote.

Malfunction have created a brutal album, that grooves and rages in equal measure, but can also stand up and be counted amongst some of the genre’s heavyweights on B9’s roster. Hardcore fans will eat this up. Its pit music and it’s fitting that they’ve landed on Bridge Nine Records as they squeeze in quite nicely alongside bands like Backtrack and Terror and I look forward to seeing these guys on the road.… Chris Andrews