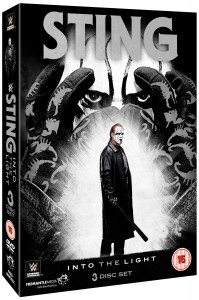 Sting — Into The Light (WWE DVD)

Now that WCW stalwart, Sting has finally joined the ranks of WWE, he at last gets the full DVD treatment and the legacy his stellar career deserves.  This is that DVD, and for the first time as well as a collection of matches (we already had that with WWE’s 2014 “Best of Sting” release) we get to shine a spotlight not only on the matches and moments that made this face-painted enigma the undisputed face of World Championship Wrestling, and the “one that got away” for Vince McMahon and the WWE, but on the man himself.  A feature-length documentary details Sting’s career in Sting’s own voice, told in the context of him finally deciding to return to the ring and sign with WWE.  We get to see Sting meet with Triple H and map out his comeback, deciding on details such as the colour of his face-paint (the addition of red to mark the difference from his classic Crow character) and new merchandising opportunities, as well as the eventual journey that would lead from his return to TV screens at Survivor Series 2014 to his showdown with Triple H at Wrestlemania 31.  It isn’t all business, however, and we see Sting at home, we see Sting at church, we see him driving around and doing chores, we see him with his family — we see Sting the man as well as Sting the superstar, and the result is an inescapably endearing portrait of a man who had every ability to be the biggest name in professional wrestling throughout the 1980s and 1990s, but who instead chose loyalty over lucre, family over fame, and remained a big fish in the small pond of WCW instead of the next big thing in WWE.  Sting’s reasons for staying are sweet — he wanted to be there for his kids and knew that a WWE schedule would take him on the road and away from home far more days each year than his lighter WCW schedule demanded.  But it becomes bittersweet as we see his frustration at the undeniable secondary status of WCW compared with WWE.  One particularly indicative story involving Hulk Hogan teddybears almost brings a tear to the eye as you learn what it must have been like to play second-fiddle to the juggernaut that was the World Wrestling Federation of the 1980s; and it doesn’t get better as we see Sting get passed over for the very same Hulk Hogan once the ex-WWE legend arrived in WCW in the middle of the 1990s.  But what makes Sting so special is his total lack of ego in all of this.  He doesn’t come across as bitter — even though an overriding theme of the doc is that it is a shame Sting didn’t make the leap to WWE decades ago, and Sting himself vocalises this idea when he makes his successful WWE debut, there is never a sense that he holds any regrets about the career he had.  Partly this is down to his religious faith (a significant portion of the documentary charts his discovery and affirmation of born again Christianity, and the role he plays in his church), but mainly I think it is just the simplicity of Sting’s worldview.  He was a kid who got into bodybuilding and then fell into professional wrestling.  His raw talent and natural enthusiasm connected with fans, and really, when you break Sting down into what his X-factor is, that is exactly it: you can’t help but like him, his enthusiasm is infectious, and his natural charisma makes him intensely watchable, even when he is doing something as mundane as throwing sticks on a fire.

Though I could have personally done without all the church stuff, the documentary is one of the more compelling ones WWE has produced in recent years, and I thoroughly enjoyed it.  Furthermore, because the Sting story hasn’t been done to death yet in WWE, not only is the documentary fresh and interesting, but so are the matches and promos on the other two discs too.  Some funny stories of life on the road, with the addition of faces from the past like Rick Steiner and Lex Luger, are a good way to kick off the bonus content, but the real gems are the matches.  So many different styles, and not a stinker among them.  Sting’s evolution as a performer is clear in every contest, and his ability to put on a great show with anyone he steps into the ring with is a testament to his longevity in the business.  From early Bladerunners action alongside Warrior, to classics against Ric Flair, the Great Muta, Cactus Jack, Rick Rude, Steve Austin, Hulk Hogan, Bret Hart, to his long-awaited Wrestlemania moment against Triple H, every match included offers something different, and every match included is a pleasure to re-live.  I cannot say enough good things about this release — the most interesting thing WWE have released for a long time. Dan McKee