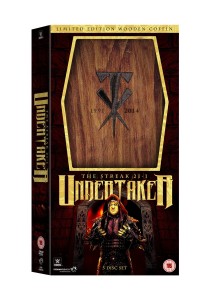 Indeed, with no documentary portion to add anything new to the Streak and simply five discs containing the twenty-two Wrestlemania matches, this set is more of an endurance challenge than it is entertainment at times.  Disc one is a hard slog — though the match against Jake Roberts is good, everything else, including his main event matches with Sycho Sid and Diesel are lumbering yawn-fests.  Disc two has excellent matches against Ric Flair  and Triple H, but it also has two mediocre matches against Kane and the aforementioned snorers involving Big Boss Man, Big Show and Albert.  Things start getting good around Disc three, with awesome matches against Randy Orton, Edge and Batista excusing the stinker against Mark Henry.  Disc four is where the magic happens, as both astounding matches he had with Shawn Michaels take centre stage.  Unfortunately, the match with Triple H that follows in 2011 just never quite managed to reach the same heights, but by Disc five, with the help of Hell in a Cell and special referee HBK they manage to sort that out and put on a show-stopper.

For my money, however, the match against CM Punk from Wrestlemania 29 is the best match since ‘Taker fought Michaels, and it really is the one where the Streak should have ended.  The Lesnar match, when it comes, is actually fairly dull once you remove the shock of the ending.

Basically, if you want to spend a lot of money on a handy collection of all twenty-two of the Undertaker’s Wrestlemania appearances that made up his 21—1 Streak, then this is the box-set for you.  The final three discs are pretty solid, and contain some of the biggest moments in Wrestlemania history.  However, if you have seen all those matches, and were looking for something more than a walk down memory lane (perhaps a genuine, insightful documentary into the man behind the Phenom, or some backstage glimpses of the decision to end the most famous winning streak in professional wrestling, and its fallout) then this is not the collection for you.  It does what it says it does and nothing more.  For some of you that will be enough.  For me, sadly, it just wasn’t.  Dan McKee