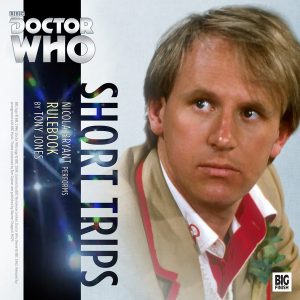 At the end of just about every televised adventure featuring our favourite errant Timelord, the Doctor and his companion/s offer a few words of wisdom, wave a cheery farewell, hop in the TARDIS and bugger off to the next adventure. Sometimes they even forgo these pleasantries and sneak off while nobody’s looking. But what if you’ve just saved a planet’s indigenous inhabitants, only to find that instead of the gratitude you may have expected, a complex system of rules and regulations prevent you from being able to leave? This is exactly what happens in Rulebook, the latest of Big Finish’s Short Trips series, featuring classic Doctors and their erstwhile travelling companions.

The thought of a story being based around bureaucracy, paperwork and regulations may sound about as interesting as watching paint dry (or watching one of those interminable Third Doctor ‘Peladon’ adventures), but bear with me – this tale has a surprisingly light and frothy surface, but hiding beneath it lies the sort of dark, bleak and totally Orwellian nightmare anyone who has lived, worked or tried to get anything done in the United Kingdom in the past five years will recognise with a wry smile.

The tale is told by Nicola Bryant, who (and this may sound fifthly, but it’s not meant to be) slips back into Peri as if she were only filming yesterday. And Peri takes centre stage here, her mounting and completely understandable frustration proving an absolute counterpart to the Fifth Doctor’s thoughtful and almost bemused reactions to the situation they find themselves in: they’ve saved the Ellani from cyborg invaders the Valtor, so why can’t they just leg it into the TARDIS and leave?

As someone currently trying to work their way through a work-based bureaucratic (and frankly illogical) nightmare that even Franz Kafka would balk at, this story resonated more than it probably should. One line about ‘rules being a substitute for thinking’ has really stuck in my head, and will do so for evermore.  In Rulebook all ends well for the Doctor and Peri. Reflecting on my current situation, I’m not sure the same will be true for me.