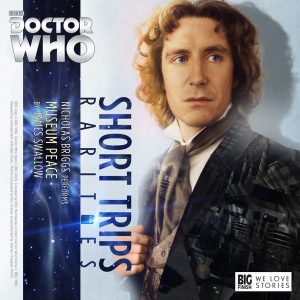 This is the final release in the Rarities collection of Big Finish’s Short Trips series. Previously available to subscribers only, this set of five Short Trips has now been released into the wild, and every single one of them is well worth hunting out. And while Eighth Doctor story Museum Peace may not be the cheeriest of tales, it’s certainly one of the most thought provoking and it’s certainly one of those stories that plays around in your mind for a long time afterwards.

The story begins on another planet, with the ageing Kalendorf sitting in a museum dedicated to the Dalek War, remembering the sacrifices that were made and glumly watching schoolchildren wander through the hall with no appreciation for the horror it represents. When a young, softly spoken man approaches Kalendorf, speaking sadly of the horrors of the war, he realises that this is the Doctor, the man he once met on Spiridon (it takes a while – the Doctor’s appearance has changed since then). Having learned that the Doctor is capable of travelling through time, Kalendorf pleads for the chance to go back and wipe out the Daleks at the moment of their creation, but the Doctor admits that he had that opportunity a long time ago, and chose not to use it.

Soon, it becomes apparent that the Doctor has a grave decision to make: one that will destroy the Daleks forever, but at the cost of everything that he holds dear. You see, the Doctor once believed that he could only repaint small moments in history, not the major brushstrokes, but he’s come to believe that this is not the case. Before he makes his decision, he has come to speak to Kalendorf in the hope that he will find some other way of going forward: one that doesn’t involve death and destruction.

As they speak, a Dalek in a nearby display cabinet lifts its weapon and fires a single blast. It’s been lying dormant for decades, hoarding scraps of power and slowly repairing itself without being detected. Having recognised the Doctor, it has chosen to take this one chance to exterminate its race’s greatest enemy. But its vision is still impaired, leading to tragic consequences and an answer to the Doctor’s question. It’s an answer yes…but probably not the one he was expecting…

In the five minutes before he arrives at the museum, the audience are gifted such a beautiful audio portrait of Kalendorf that we feel as if we have always known him, and that’s all down to James Swallow’s absolutely gorgeous writing. And it doesn’t just start well: he directs the Doctor perfectly, and Nick Briggs’ narration provides that soft, thoughtful intonation Paul McGann makes integral to his Doctor. The conversation between the two protagonists is a joy to listen to from start to finish. This is a real jewel. A heart-breaking, tragic jewel, yes: but one that still manages to sparkle for all of that. DW fans I implore you: listen to this! Bex Ferriday